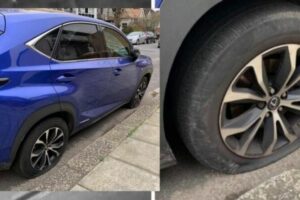 Drivers around the country are returning to their cars to find tyres have been deflated as a spate of the offence seems to be on the rise in the UK. The crimes are due to a green activist group who have targeted SUVs to highlight their beliefs.

The offences are being carried out by the group called Tyre Extinguishers, which is thought to be a splinter group of Extinction Rebellion.

Now, police have issued grainy CCTV of two suspects believed to be deflating tyres of SUVs in Brighton.

The Tyre Extinguishers have claimed to have struck more than a thousand 4x4s nationwide including 20 SUVs this week in South London.

The group has stated they want SUVs banned in urban areas, pollution levies to tax SUVs out of existence and investment in public transport.

Sussex Police has received 54 reports of vehicles having had their tyres deflated so far, the vast majority of which occurred overnight on the weekend of March 7.

Inspector Nicky Stuart, of Brighton and Hove’s Neighbourhood Policing Team, said: “We understand the impact these crimes are having on the community and I would like to reassure the public that our officers are working round the clock to catch those responsible.

“This type of behaviour will absolutely not be tolerated in Brighton and Hove, and while we have seen a marked drop in the number of incidents since the weekend of March 7/8, any such occurrences are unacceptable.

“We are exploring several lines of enquiry, but as always the public are our eyes and ears.”

The activist group seemed entirely unperturbed by the police’s actions however.

They even shared a screenshot of the appeal and goaded Sussex Police on Twitter, saying: “We like that Sussex Police have labelled this video ‘Operation Extinguisher’.”

“Will your area be next?”

They also claimed on the account that they had deflated the tyres of more than 20 vehicles in Clapham Junction and Battersea.

The group says their activism has also spread to some states in the USA including Arizona and Colorado.

Activists also targeted the wheels of dozens of SUVs in the Didsbury suburb of Manchester last week.

But the owner of one of the cars said it was an electric vehicle and condemned the group’s actions as “dangerous and irresponsible”.

“It’s not just an inconvenience,” he told the Manchester Evening News . “My wife’s pregnant and I need to get her a hospital at some point.

“If I can’t do that because my car tyres have been let down, I’ve got to call an ambulance which takes that off of the road for somebody else, which is frankly dangerous and irresponsible.”

Last month the Tyre Extinguishers claimed to have ‘disarmed’ over a thousand SUVs in Brighton, London, Manchester, Birmingham, Sheffield, Bristol, and Edinburgh.

Tyre Extinguishers said they were preparing to launch French, Spanish, Italian and German versions of leaflets “at the request of activists”.

Activist Marion Walker said: “We’re looking forward to people all over the world getting involved when we have our leaflet in five languages.”