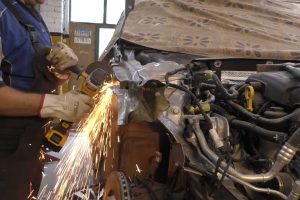 It may come as a surprise to know that even the mildest of road accidents can lead to a destroyed automobile. But rather than taking them straight to the scrapyard, YouTuber Arthur Tussik refurbishes them back from the dead – in his latest video, he showcases a Volkswagen Jetta restoration starting from a mangled mess all the way to something resembling a car.

For the uninitiated, you may think Tussik only works on four-door people carriers like the VW, but his workplace isn’t just your average chop shop. Throughout his career, he’s taken his hand to BMWs, Teslas, and Lamborghinis.

The Jetta revival begins with bending everything back into place at the rear. With some clever pushing and pulling, he managed to persuade as much of the chassis and miscellaneous components back to where they once were with the help of a clever laser alignment system. After some more welding and gluing, things started to finally come together with ease.

We were convinced that the rear of the car was the worst of the damage, but the other end was a completely different story. After bending some of the most mangled chassis rails we’ve ever seen, somehow a new front subframe fit like it was made to measure. It’s very surprising to see just how plug-and-play many of the body panels and components on modern vehicles have become; after getting the bones back into shape, everything looked to fit as it should.

Truly a master of his craft, Tussik has the ability to take just about any panel, cut it to size, and make it look like an OEM component. As the video description mentions that about 80 percent of the body panels were replaced in the process, the final product is very impressive.

In just 60 hours he turned a vehicle that was destined for the graveyard back into something resembling an automobile. Sure, there’s a bit more work to be done in the paint and interior department, but it shouldn’t take anything away from Tussik’s amazing work and commitment.