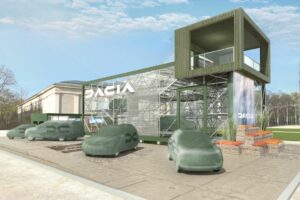 Renault’s Romanian budget car brand Dacia has been quite a busy bee recently, introducing a new, almost military-style corporate identity and the facelifted Duster SUV. But the company is already looking forward to the Munich Motor Show in September – the replacement for the Frankfurt show – by announcing that it will unveil a new seven-seater family car there.

As expected from such an early stage, there have not been any details released, but Dacia did say it will be “highly versatile”. It will likely replace the Lodgy MPV and could take the form of a larger SUV, given the company’s renewed focus on crossovers and its more rugged brand image.

Dacia could take some inspiration from the Bigster concept shown earlier this year, portraying a more upmarket C-segment SUV. The show car marks a departure from the company’s more bargain basement designs, with an imposing angular look, a full-width headlight and grille, strong front and rear haunches and large wheels. It also sports Dacia’s new X-shaped logo, meant to represent an interlocking “D” and “C”.

Mechanically, Dacia expects the production version of the Bigster to come with alternative fuel and hybrid engines, although no specifics have been set in stone. Right now, the most powerful engines in the Dacia range are a 1.3 litre turbocharged three-cylinder petrol making either 130 PS or 150 PS and a 115 PS 1.5 litre turbodiesel, although a larger car could see the introduction of more powerful mills.