Czinger 21C: An Exclusive Interview With The Hypercar's Creators 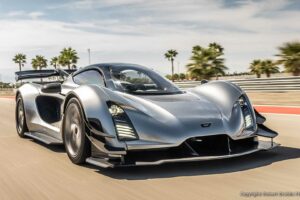 Supercars and hypercars are now a dime a dozen, but this one stands out from the crowd in many respects. It’s the Czinger 21C, where 21C stands for the 21st Century. And the company created by founder Kevin Czinger (pronounced like “singer”) didn’t merely go on a shopping spree to build a typical high-horsepower exotic car.

The 21C with its unusual seating arrangement is far more innovative, as Kevin Czinger and his son Lukas explained to Motor1.com in a personal interview at the 2022 Goodwood Festival of Speed.

Motor1: An extraordinary car, especially from the inside. The cockpit looks like it’s straight out of an airplane.

Lukas Czinger: That’s right. Our inspiration was the Lockheed SR-71 Blackbird, a spy plane with a top speed of Mach 3.3.

Kevin Czinger: It inspired us to do the 1+1 seating arrangement. There’s also a lot of “form follows function” in it. We paid careful attention to the aerodynamic performance of the car. There’s also more room for the fenders, etc., to create downforce. This car generates up to 2.5 tons of downforce at 200 mph (322 km/h), which is the highest downforce ever achieved on a production car.

Motor1: One of the questions you probably hear a lot: Why build another supercar?

Czinger: I think you’re asking exactly the right question. If this were just another supercar, absolutely not! What is being demonstrated here is something that has never been seen before in the world. The entire manufacturing process is based on digital tools that allow the engineers to perfectly shape their technical creativity into a form. That mold is printed on machines with materials we design and then assembled.

Motor1: The vehicle’s engine and powertrain were developed by you?

Czinger: It’s our own powertrain. You want the ultimate car that you can drive in electric mode to pick up a slice of pizza, and then go to the track and break the track record.

Motor1: So it’s an exceptional powertrain, but not rocket science?

Czinger: You get in and it’s like driving an electric car at low speed to the supermarket. Then when you go to the race track, you’re using the power of the engine and the power of the electric motor. And then it’s an absolute racetrack beast. The extraordinary thing about it is, it’s a production car that, the faster you go, the more linear it is. Cut into the corner, come out of the corner.

We developed our own design software, our own manufacturing technology and materials, and our own assembly system from the ground up. That’s the reason the car can beat brands like McLaren or Aston Martin on the track, not because we do what they do better. We do something different.

Now, let’s take a closer look at the technology of the 21C: The hybrid powertrain is based on what Czinger claims is the world’s most powerful production internal combustion engine per displacement. It is a 2.88-liter V8 with a flat-plane crankshaft and two turbos arranged in the center of the vehicle. It alone produces 950 horsepower and 549 pound-feet of maximum torque.

That V8 is coupled with an 800-volt electric drive and regeneration system. An electric motor drives each front wheel, and the batteries are recharged during operation by both regenerative braking and a motor-generator unit (MGU) that uses a gearbox attached to the combustion engine. The entire powerful hybrid system delivers a peak output of 1250 hp. The powertrain also includes a seven-speed sequential transaxle with an electrohydraulically actuated multi-plate clutch.

The Czinger 21C, the first model in a limited series of 80 exclusive high-performance vehicles, was produced in part using additive manufacturing technologies. Each component made with this technology is computer-designed using artificial intelligence, optimized for weight and performance, and finished by hand.

The 21C features significant updates since its first public unveiling in March 2020 ahead of the canceled Geneva Motor Show, including an updated width of 80.7 inches. With 1,250 hp and a dry weight of less than 2,734 pounds, the 21C achieves a true 1:1 power-to-weight ratio. That’s before an optional 100-hp upgrade that bumps total output to 1350 hp. In addition, the 21C is designed to run on a range of fuels, including recycled methanol and other e-fuels, so it can operate as a zero-emission vehicle. Officially, it gets 22.6 miles per gallon according to the WLTP standard.

The numbers translate to impressive real-world performance. Czinger went to Circuit of the Americas (COTA) in Austin, Texas and beat the previous lap record for production vehicles set by a McLaren P1 by more than six seconds. The 21C was in full street trim with a complete interior, lights, and Michelin Pilot Sport Cup 2R tires. The record time was set on September 23, 2021, with driver Joel Miller at the wheel. The lap time of 2:11:33 was recorded using multiple GPS systems. The previous record was 2:17:12.

Every component that is computationally developed, printed, and assembled is at the limit of theoretical performance. For example, the front upper control arm is hollow and has internal structures that enable significant weight savings compared with a conventional, tooling-based variant, thereby substantially reducing unsprung mass.

During the Goodwood festival, Czinger also unveiled its partnership with Alcantara, an Italian company with a strong presence in the automotive, design, fashion, consumer electronics, and marine industries. The partnership makes sense for both Czinger and Alcantara as the companies are committed to sustainability, placing style and innovation at the heart of their respective businesses. Both design teams worked together to develop a wide range of innovative applications for the lightweight Alcantara materials and to make the interior of the Czinger 21C extremely personalized.

The first fully homologated Czinger 21Cs are scheduled for delivery in late 2023. They will be developed and manufactured in America and should cost around $2 million, but the story doesn’t end with the 21C. Czinger revealed that a four-seater model at a lower price point will be revealed in the coming weeks.

Czinger: We want to make high-performance cars with lower volumes so we can always offer the latest developments. But we have a technology that can make completely new and different structures without investing in new casting and stamping tools, so we can make very different cars. By the end of the decade, in 2030, you’ll have six or seven different models, each of which will be very different and define a slightly different segment.