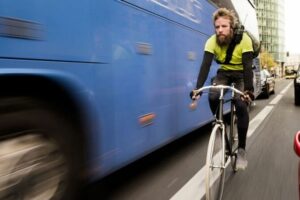 Jonathan White, spokesperson for the National Accident Helpline said you would “expect cyclists” to use lanes designed for them if available. However, new rules changes say drivers should “ride in the centre of your lane” under some circumstances.

Speaking to Express.co.uk, he said: “Where there’s a cycle lane specifically designed for use by cyclists, you would expect cyclists to use that.”

He added: “That would seem a bit daft to drive in the middle of the lane when there is a nice cycle lane, specifically designed for you to ride safely.”

Rule 72 of the Highway Code says drivers should ride in the centre to make themselves “clearly visible”.

This is appropriate on quiet roads or streets, in slower moving traffic or when approaching junctions or road narrowings.

Cyclists have also been given extra priorities at junctions and roundabouts to boost road safety.

The new plans were backed by more than 88 percent of respondents in a Department for Transport consultation.

However, some who disagreed with the changes felt the new rule came with risks.

They said the new rules could put “too much burden” on the drivers of vehicles to spot cyclists who do not always wear hi-viz jackets.

They also warned the changes could “put the lives of cyclists at risk”.

Neil Greig, Director of Policy and Research at IAMRoadSmart has previously warned of the dangers of allowing cyclists in the middle of lanes.

He said: “A lot of drivers are going to think that somebody cycling in the middle of the lane in front of them is doing it to deliberately slow them down.

“That leads to conflict and road rage and inappropriate overtaking.