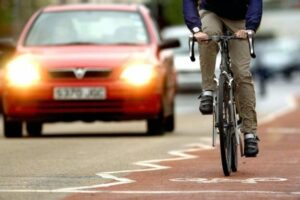 Cyclists will be expected and encouraged to ride down the centre of the road according to one of the rule changes to the UK’s Highway Code. The amendments come into place at the end of next week and are proving controversial thanks to a new “hierarchy” of road users.

Amidst a raft of almost 50 changes to current road laws, one instruction is that cyclists should take up the middle of the road unless a “faster” car is behind them, in which case they should pull to the left.

But that rule is coming under criticism for potentially leading to more road rage incidents involving cyclists.

That’s despite the new rules being designed to protect the most vulnerable.

A hierarchy of road users puts pedestrians at the top, then cyclists, then car drivers in order of importance.

Pending parliamentary approval, the new laws and rule changes will come into place on January 29 of this year.

Another rule involving cyclists sees drivers having to give anyone on a bike 1.5 metres of space when passing them.

Even when a cycle lane is present, people riding bikes will not be obliged to use them.

And they will also have to give way to any pedestrian waiting to cross while turning into a junction.

Neil Greig, the director of policy and research at IAM RoadSmart, a road safety charity, told the Times: “A lot of drivers are going to think that somebody cycling in the middle of the lane in front of them is doing it to deliberately slow them down.

“That leads to conflict and road rage and inappropriate overtaking. Everybody needs to know all of these changes at the same time for it to work.”

And The Alliance of British Drivers decried the changes as possibly dangerous, saying: “The proposed hierarchy of road users is likely to create or exacerbate resentment and ill feeling between different classes of road user, and may lead to irresponsible attitudes by cyclists and pedestrians.

“All road users have a responsibility towards all other users and should treat one another with respect and tolerance.”

Another controversial law being put into place is the “Dutch Reach” which forces drivers to use their wrong hand while opening their car door.

This ensures they see over their shoulder when exiting a vehicle and prevent cyclists being hit.

The fine for not opening the door in the new, correct manner is up to £1,000.

But many drivers have no idea about the Highway Code changes or how it could affect them.

Jack Cousens, Head of Roads Policy at the AA said: “With a week to go, too many drivers are unaware of the new rules of the road.

“While the Government formally announced these changes last summer, they have been far too silent in promoting them.

“Shockingly, one in 25 drivers say they have no intention of looking at the new rules.

‘These changes affect everyone, so we encourage people to read the updated code now so we can make our roads safer.”