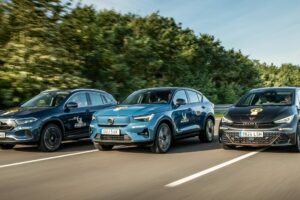 The all-electric Volvo C40 Recharge meets another premium wannabe in the Cupra Born. But can they beat the super-posh new Mercedes EQA?

The clamour for car makers to be seen as premium is only matched by the rush to get increasingly sought-after electric cars into showrooms. EVs are in demand and EVs with posh badges mean bigger profits for those who make and market them.

That’s partly the thinking behind Spanish upstart Cupra. Once just a tag for hot SEATs, it’s now a brand in its own right, attracting younger buyers with its upmarket positioning and sporty styling.

As with everyone else, it’s going fully electric, and the Cupra Born is its first EV. It shares its tech with other members of the Volkswagen Group, starting with the MEB architecture, so there’s no surprise that there’s more of a passing resemblance to Volkswagen’s popular ID.3 electric hatch.

In keeping with Cupra’s brand values, the Born gets sportier details and sits slightly lower and on bigger wheels than the VW, plus it has a more upmarket interior.

If Cupra wants to know how to muscle in on the upmarket elite, it need look no further than Volvo. The Swedish brand has done a remarkable job in recent years of establishing itself as a real premium player, combining tech and electrification with strong quality and cool, Swedish design.

The new C40 is the first Volvo model to only be available as an EV, which is why it also officially wears a Recharge badge. To all intents and purposes, it’s a sleeker, sportier, crossover version of the XC40 SUV (available as an EV and an ICE car) and is aimed directly at those with sustainability in mind by being 100 per cent leather-free.

However, the granddaddy of the premium brands is Mercedes, which itself is on a journey of reinvention with its electrified EQ sub-brand. The new EQA is its smallest all-electric crossover and, like the Volvo, it uses a platform that also underpins models with combustion engines and a combination of electric and combustion – in this case the hugely popular Mercedes GLA.

Auto Express was given an exclusive opportunity to put these three newcomers head-to-head as part of the judging panel for our German sister title Auto Bild’s Golden Steering Wheel awards. And while our verdict won’t necessarily be the same as that of the rest of the Golden Steering Wheel committee, it offers a great chance to see whether it’s the new kids on the block or the more established players who are going to come out on top in what is likely to be one of the most popular sectors of the rapidly growing EV market.

First in the pit lane for us to try at Germany’s Lausitzring circuit, not far from the Polish and Czech Republic borders, is the Born, looking great in its deep black paintwork, with copper-coloured Cupra badges and lower grille.

While the Born is clearly related to the ID.3, especially in profile, it looks a whole lot sexier than the VW, thanks to the more sculpted bonnet, textured C-pillar, full-width angular rear lights and slim front LEDs.

Similarly, the inside clearly takes the ID.3 theme but Cupra-ises it with more copper accents, a few bits of suede, and sportier front seats; it’s definitely the snazziest of the three cars we’re testing here.

The large 12-inch infotainment screen uses VW hardware with Cupra-developed software, so it suffers similar usability foibles; rest your thumb on the base of the screen and you’ll find either the volume or air-con being adjusted because that’s just where those controls sit. We also found the touch-sensitive steering wheel controls can be inadvertently operated by the heel of your hand when turning, and the steering wheel also annoyingly obscures the gear selector that, like the small driver display, adjusts with the wheel itself.

That said, the Cupra’s cabin is appealing, although – like the ID.3 – its quality could do with a boost, given the likely price of around £40,000 for our mid-spec car.

Although the Cupra’s 0-62mph time is some way off that of the super-swift Volvo (you can get a slightly faster Born with a bigger battery), it actually feels sportier through corners, the weight of the battery pulling the car down and Cupra mode giving the steering more weight, if not more feel. The ride can get a bit bouncy, but it isn’t uncomfortable, while the brake feel isn’t as firm as we’d like or expect (given the regeneration work the brakes have to do).

There’s enough rear space for a couple of adults to sit comfortably, although the front seats with their fixed headrests aren’t the easiest to see around.

The boot, too, is an okay size – bigger than the EQA’s but smaller than the C40’s, with a handy area under the floor. As with the Mercedes, there’s no additional storage under the bonnet; the Volvo, on the other hand, gets a handy 31-litre well in its frunk.

Take performance, for example. The sizeable 78kWh battery and motors on both the front and rear axles mean the C40 will outpunch the other two by a considerable margin. The 4.7-second 0-62mph time will give you chance to take a relaxed look at your watch before the Cupra (7.3 seconds) and especially the Mercedes (8.9 seconds) reach the same speed. It’s the same on the move, where a flex of your right foot will propel the car forward and you back into your seat at a positively Tesla-esque rate of knots. It’s fun and addictive, and quite a surprise given the car’s weight.

That large battery doesn’t equate to a bigger range, though. Judged on the latest WLTP standards, all three cars are similar, with the Volvo claiming a range of 261 miles and both the Cupra and Mercedes offering 263 miles between charges.

While the C40 looks good in the metal, the sloping back end – the only real change (other than an even higher price) over the XC40 SUV – makes the car look tall. And it feels it, too, with plenty of body roll, light steering and a ride that can feel fidgety.

Given the list price, we’d expect far better quality inside than the C40 offers. There might be some interesting treatments to the plastic graining, but you can’t hide the fact that some of the materials feel cheap.

They’re just about acceptable on an entry-level petrol-powered XC40 with a £25,855 price tag, but not on this model that costs more than twice that much.

Volvo is trumpeting the fact that the C40 – like all its electric models – will be leather-free, with a further nod to sustainability thanks to, for example, door panels made out of recycled materials. Cupra, too, is making much of the reused materials inside the Born.

The Volvo’s Google-powered infotainment system works brilliantly – especially with voice control – although the 12-inch portrait screen looks small sitting lower in the dash compared with the high-set widescreen units in the other two cars.

As you’d expect from a Volvo, there’s decent space inside, and the seats are comfortable, but that sloping roof takes a toll on rear headroom, while the view through the back window is a little like looking through a letterbox. The view sideways and forwards for anyone sitting in the back – including kids – is good, while a standard glass roof brightens the interior and provides a nice view up, too. The rest of the kit count is pretty impressive in the C40, but then, you’d hope so at this price.

By contrast, stepping into the Mercedes is like moving to the front of the plane – everything is first class. Our German-spec car is close to Sport spec in the UK with the driving assistance pack meaning it would retail at £47,340 – a considerable saving over the Volvo, which you could pocket or spend on a few choice extras. Not that the cabin really needs it; the combination of posh materials, the twin 10.25-inch screens and the five, circular, “industrial chic” air vents make the EQA feel upmarket and advanced. Mercedes’ MBUX system, with its “Hey Mercedes” voice control, isn’t far off the Volvo’s Google set-up, either.

It’s fair to say that Mercedes has taken a more relaxed dynamic route than its rivals, with the EQA riding better than the other two cars. It’s also the quietest at speed. Compared with the Volvo, and to a lesser extent the Cupra, its performance is pretty relaxed, although we never thought the car felt tardy. The steering offers more feedback than either of the other two, though, enabling you to feel when that big body is going to lean through corners – and it does.

There’s a better view out all around in the Mercedes than in the others, while head, leg and kneeroom are decent, although you do sit with your knees higher in the back than in the other two EVs here.

The EQA’s boot is a good shape and the floor sits flat to the bumper, but it’s the smallest here, with only a shallow storage area under the floor for cables.

After our first look at these three important new models together, which would we choose? Each has plenty of appeal and would be easy to live with, but the simplest to discard is the Volvo, pretty much on price alone. It’s just too expensive, especially given the quality and ride comfort – although its strong performance is still really appealing.

Splitting the Mercedes and the Cupra is more difficult. We love the quality and the comfort that the Mercedes offers, and the price doesn’t seem exorbitant for what you get. However, the Cupra Born brings a youthful edge to the EV sector, while it does much of what its rivals do for less money.

It may have a few foibles – notably some of the tech and the quality – but we like the way it looks and the way it drives, while it also does the day-to-day things most people will need their electric hatchback to do really well, all at a decent price.

Cupra beats Mercedes and Volvo, then. We didn’t think we’d be saying that any time soon.

“This verdict shows how, as the industry moves towards full electrification, the changes can be a leveller. Cupra has developed a convincing EV with the Born; we can’t wait to see what it does with the Tavascan SUV.”