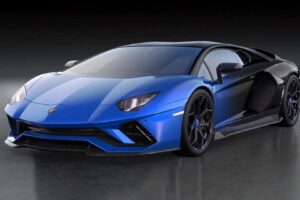 If you don’t know what an NFT is, it’s a “non-fungible token”—a digital item that is serialized, which means some can be 1 of 1. Of course, if you don’t know what an NFT is, the definition we just proffered won’t be of much help. You’re either savvy to this new form of digital ownership, as you probably are to the blockchain generally and cryptocurrencies, meme stocks, and other confounding twists on traditional value-accrual methodologies, or you’re not, and we doubt you’ll find deeper enlightenment here at MotorTrend. Maybe pick an afternoon to fall down a Reddit rabbit hole. Anyway, you need only understand the basic definition of an NFT for the purposes of this dispatch from Lamborghini, which teamed up with some cultural big swingers to create a “1:1 NFT” that will be auctioned later this month alongside the final Aventador supercar the Italian automaker will produce.

Bidding on this particular 1 of 1 NFT means you’re also bidding on the last-ever Aventador, and vice-versa. Lamborghini states it “is auctioning a super sports car linked to an exclusive NFT, before the top model of the Italian luxury brand becomes a V-12-powered plug-in hybrid,” adding that “the drop is the world’s first NFT ever to be auctioned with a physical super sports car.” First up, that supercar: It’ll be the last Aventador ever built—the line-topping V-12 monster has been on sale for over a decade—which will take the form of a Lamborghini Aventador LP 780-4 Ultimae coupe.

As for the NFT part, well that will take the form of a digital artwork created with visual input by Krista Kim, whose “gradient” artwork style will also be applied to the physical Aventador included in the sale. Steve Aoki will create a “custom-developed track for the NFT, an exclusive soundtrack for the physical car inspired by the last Aventador and will consult on the design of the NFT and physical car customization.” So, to recap, if you bid on this auction, you’ll receive a digital NFT with sick beats by Aoki and visuals by Kim, plus a Lamborghini in which you can look at said NFT while listening to its soundtrack. Lamborghini declares that this send-off for the aging Aventador is poetic, as the brand is ushering in its electrified future in the coming years; what better way than to enshrine the supercar at the intersection of the digital and physical worlds?

We think it’s fitting that Lamborghini is selling off, in effect, its final Aventador—a car most people couldn’t afford outside an auction’s fevered atmosphere of overpayment—along with a digital entity currently enjoying a “moment” and therefore its own sort of fevered, FOMO-inducing investments. If you’re one of those folks with the means to even consider bidding on this project—maybe you just hit it big selling an NFT and your crypto investments are way up, who knows?—the sale includes not only the NFT and actual Lambo, but also a digital replica of the Aventador saved as a GLB file (billed as “the very first Lamborghini for the metaverse”); a virtual peek into Lamborghini’s future plans; and a few one-time-only experiences, including 15-minute virtual calls with Krista Kim and Steve Aoki and a private tour of the Lamborghini Museum, though flights and hotel stays aren’t included. Bummer if you spent all your dough on the NFT and car, right? In an appropriate twist that sounds like a hype-building twitter callout for a meme stock or NFT drop, Lamborghini says that if the auction hammers at over €5 million, Lamborghini will host a delivery party for the buyer. Again, if you spend “just” €4.99 million, looks like you’ll need to create an NFT of your disappointment; maybe we’ll buy that one someday and experience that same hurt.

Hey, it’s all clever buzz, though it’s neither the first or last intersection of automakers and NFTs (heck, Lambo already made one), so best you go dive into a subreddit about them and learn up. If you’re curious about the outcome of this NFT/Lamborghini drop, stay tuned for the auction hosted by RM Sotheby’s, which will run for 48 hours starting at noon ET on April 19.