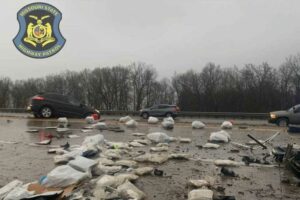 If you’re not familiar, April 20 or simply 4/20 is a day associated with the consumption of marijuana. This timing makes it all the weirder when a truck crash on this day results in 500 pounds of weed falling onto the highway.

The weird incident happened at around 7:15 AM local time in Callaway County, Missouri, on Interstate 70, according to the police report. A semi-truck tried to avoid a previous crash, and the driver of a 2007 GMC Sierra ran into the back of the big rig. Another semi then hit the pickup.

When the Missouri Highway Patrol arrived on the scene, they found packaged bundles of weed all over the interstate. The pickup involved in the incident was the vehicle carrying the marijuana, according to police. In total, the pot weighed 500 pounds.

Two men and a woman were in the truck, and they all suffered moderate injuries that required transportation to the hospital. Police arrested the two men for drug trafficking, which is a first-degree felony.

The other motorists involved didn’t have serious injuries, according to KOAM News.

Right now, there are two measures in Missouri to legalize the recreational use of marijuana. One of them is a ballot initiative that’s still gathering signatures and would put the legalization up to the vote in November 2022. The other is moving through the state’s legislature and recently cleared a second committee.

Trucks often spill weird stuff onto the highway. Although, this rarely happens with the coincidental timing of dumping weed onto the road on 4/20.

In the past, we’ve seen incidents where trucks dumped items like liquid chocolate, cases of beer, Deadpool comic books, and 30,000 pounds of TV dinners onto the road. Some of the grosser examples have been stuff like sardines and slime eels.

A recently published study by the Insurance Institute for Highway Safety indicated that injury accidents were 6.6 percent higher on average in states with legalized marijuana. Fatal crashes were 2.3 percent higher.

These are just the overall averages, though. The state-by-state breakdown found injuries could increase by as much as 18 percent to decrease by 8 percent, depending on the location.

It’s worth noting that this study is looking at crashes in states with legal marijuana. The people involved in the recorded incidents are not necessarily using weed.