Home » Car Reviews » Could a Military-Spec Hummer EV "eLRV" Be a Thing?

Could a Military-Spec Hummer EV "eLRV" Be a Thing? 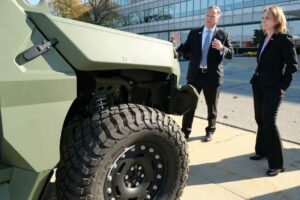 Could there be a time and place for electric military vehicles? It sure seems like it. It’s possible that GM Defense could produce a military version of the new 2022 GMC Hummer EV electric truck and SUV. In a effort to capitalize on General Motors’ growing investment in electric vehicles, a non-tactical Hummer EV-based electric Light Reconnaissance Vehicle (eLRV) could eventually make its way into Army fleets. The program is still in the initial informational stages as the assembling, testing, and evaluating of these eLRV Hummer EV prototypes may happen sometime in 2022. Additionally, there’s no guarantee the military would select the Hummer EV-based option.

Similar in concept to GM Defense’s Chevrolet Colorado ZR2 Infantry Squad Vehicle (ISV) designed for the Army, the eLRV would be based on a production truck. In this case, it’d be the Hummer EV, a battery electric vehicle that’s large and clad with off-road features. While much of the eLRV Hummer EV would be modified to meet specific military specs—the Colorado ISV, for example, features a radically different body—certain components like the frame, motors, and Ultium batteries likely would be reused.

Kathleen Hicks, Deputy Secretary of Defense, recently visited with GM Defense to discuss the future of electric vehicle technology and reinforce the Department of Defense’s efforts to become more electrified and autonomous. She even had the opportunity to get behind the wheel of an ISV during the visit.

“I appreciate Secretary Hicks taking the time to get to know GM Defense as we look to partner with Department of Defense on its electric future. As the leader executing the DoD’s priorities, her leadership in the pathway to electrification is inspiring,” said Steve duMont, president of GM Defense.

What solutions can GM’s battery technology bring to the defense and government sectors? The foundation is being laid, and the next ten years will help answer this question.

Happy Veteran’s Day to all the heroes who have served in the U.S. military. We thank you for your service.