Confirmed: Nissan Leaf Will Be Replaced By Electric Crossover 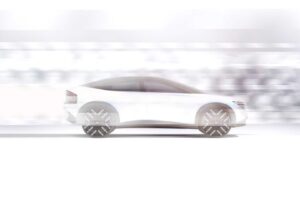 Nissan has confirmed that the new electric compact crossover it will build at its Sunderland plant in the UK will replace the Leaf hatchback.

In July, Nissan announced plans to build a new crossover in Sunderland as part of a £1 billion ($1.37 billion) investment in the plant to secure its future. Now, Nissan Europe boss, Guillaume Cartier, has confirmed that the new model will be a replacement for the Leaf.

Expected to launch around 2025, the Leaf crossover will be based on the Renault-Nissan-Mitsubishi Alliance’s CMF-EV platform that’s also used by the Ariya and Megane E-Tech Electric. This means that Nissan’s core future model lineup in Europe will be made up exclusively of electrified crossovers: the Juke, Qashqai, Ariya, X-Trail, and the Leaf replacement.

When it announced the new CMF-EV-based crossover, Nissan said it will be produced in up to 100,000 units a year at the Sunderland plant. The carmaker also said the crossover will be designed for global markets and exported from the UK to European markets. The compact crossover will feature Envision AESC’s latest battery cells, which will be manufactured in a new battery gigafactory.

The move will mark the end of Nissan’s Leaf, one of the first mass-market EVs launched a decade ago. It’s unclear whether its replacement will retain the Leaf moniker. The decision also spells the end of Nissan developing conventional models in Europe, such as sedans, hatchbacks and estates. However, the Japanese automaker will turn to its Alliance partners to source underpinnings for other segments, including a small EV replacing the Micra, Cartier said according to Autocar.

Nissan expects to electrify its entire range (either full EVs or E-power hybrids) by 2025 and forecasts 80% of its sales to be full EVs by 2030. The carmaker will be revealing plans for its next era of electric cars and electrification later in the autumn, CEO Makoto Uchida said.