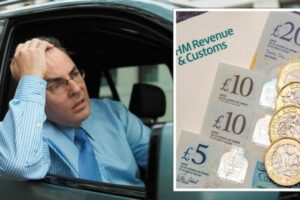 Why motorists could pay more in car tax in 2022

Following changes to car tax on Friday, April 1, many drivers have seen their Vehicle Excise Duty (VED) payments increase, based on the emissions output of their car. Matthew Walters, Head of Consultancy Services and Customer Value at LeasePlan UK, called on the Chancellor to inform drivers on the future of taxation.

He said: “Previously, Rishi Sunak had a good record on warning businesses and motorists of upcoming Company Car Tax rates.

“However, that record is starting to tarnish.

“The rates for 2025-26 and beyond still haven’t been confirmed – meaning that fleets entering into three- or four-year contracts today are unable to plan properly for the future.”

Benefit-in-Kind (BiK) is a tax on employees who use a company car for private use.

Anyone who does this will need to pay a BiK contribution or company car tax.

From this week, this tax is set to rise from one percent to two percent for fully electric vehicles.

After this upcoming tax year, the BiK rate will remain at two percent until 2025, although many, including Mr Walters, believe more could be done.

Some called on Rishi Sunak to extend the existing two percent BiK rate until 2030 to help more drivers and businesses make the switch.

Estimates show that a BiK freeze at two percent until the end of the decade would see around two million drivers change their vehicle to electric.

The BiK tax is usually much higher for petrol and diesel cars, resulting in more employers and employees choosing to offer and take up electric vehicles.

BiK rates for other vehicles are also set to increase by one percent, although any cars which release more than 165 grams of CO2 per kilometre see their tax rates staying at the same level of 37 percent.

Many other drivers also called on the Government to provide some clarity on other car tax plans.