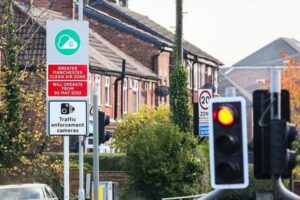 Greater Manchester will follow in the footsteps of other areas, like Birmingham and Bath, by introducing the Clean Air Zone (CAZ) in May next year. The aim is to reduce the number of polluting vehicles on the region’s roads and signs have already been erected warning motorists of the change.

Critics are concerned many drivers, particularly traders driving into the region, won’t understand the meaning of the signs – or that the CAZ even exists.

Chris Manka, Federation of Small Businesses (FSB)’s north west regional chairman, said: “Far too many businesses, especially in the trades – so that’s your painters, decorators, plumbers, carpet fitters, etc – don’t have the foggiest about the CAZ, and that’s just in Greater Manchester.

“The message we are desperately trying to get across is that the Clean Air Zone is definitely happening, it’s on the way, what are you doing to prepare for it.

“If you speak to businesses over the border in Cheshire, Lancashire – or any of the places outside of GM (Greater Manchester) from where the trades travel to do business here – they’re even more in the dark and they’ll still be affected.

“This is a real problem that needs addressing now.”

FSB has been lobbying MPs to push the DVLA to write to all affected businesses in the region, reports Manchester Evening News.

Any vehicles, including taxis and coaches, which fail to meet emissions standards will need to pay a daily charge to drive anywhere in Greater Manchester.

The charge will be £60 a day for HGVs, buses and coaches, with vans paying £10 and taxi and private hire vehicles paying £7.50.

Failure to pay the charge will also result in a £120 fine plus the daily charge.

The zone is being enforced by Automatic Number Plate Recognition (ANPR) cameras and now the first signs have been spotted on some of the region’s roads.

One sign, put up last week in the Oldham area, shows the CAZ symbol, a green cloud with the letter C.

It also says “Greater Manchester Clean Air Zone Will Operate From 30 May 2022.”

In a tweet earlier this week, Transport for Greater Manchester reassured drivers: “You may see GM Clean Air Zone road signs and enforcement cameras popping up over the next few months.

“We’re just testing the cameras at the moment.”

The ten Greater Manchester councils insist they are legally obligated by the government to introduce the Clean Air Zone to secure compliance with Nitrogen Dioxide legal limits on local roads in the shortest possible time, and by 2024 at the latest.

Air pollution is said to contribute towards at least 1,200 deaths per year in the city-region.

More than 44,000 drivers were fined in the first two months of the CAZ in Birmingham.

It has led to fierce debate in the city, with poverty-hit families already struggling to pay for living costs having to fork out.