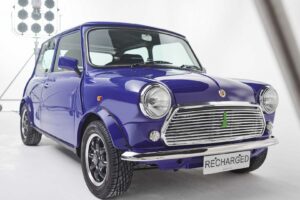 British automaker Mini and iconic designer Paul Smith are back at it again with another new project. Called the Mini Recharged, it’s a makeover of a classic 1998 Mini Paul Smith Edition, with a nod to the past and a progressive look into the future.

However, as a Paul Smith Edition, the one-off EV does come with bright blue paint, said to be one of Smith’s favorite shirts. Meanwhile, the battery box comes with a lime green finish, which recalls the ’90s color palette.

“When you move into your old aunt’s flat, out of respect you don’t change everything, but you do some modernizing,” said Sir Paul Smith.

Inside, the Mini Recharged adopts the minimalistic approach of the Mini Strip that was presented in Munich last year. Paul Smith was also the designer behind the concept, which he applied to this bespoke project.

That said, the bodyshell of the Mini remains unclad with only rustic floor mats made from recycled rubber mats resting on top of the metal. There’s a magnet near the steering wheel to accommodate a smartphone, replacing all the buttons and controls on the dashboard except for the speedometer. The steering wheel can also be completely removed to allow easier ingress and egress.

Meanwhile, the conversion to EV was handled by the engineers from ‘Recharged Heritage Limited,’ installing a 72-kilowatt electric motor. The exact range of the one-off EV was not disclosed in the release.

The Mini Recharged by Paul Smith will be displayed in the metal at the Salone del Mobile 2022 in Mila, alongside the Mini Strip from last year.