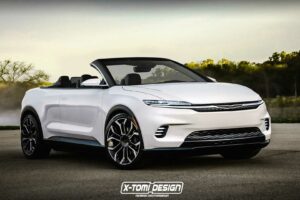 As automakers press further into the realm of SUVs and crossovers, the abandonment of smaller coupes also means fewer convertibles on dealership lots. There have been some attempts over the years to offer roofless SUVs beyond the likes of the Jeep Wrangler, but they haven’t exactly been, what’s the word? Good. Yes, that’s definitely the word.

We have no idea if a new Chrysler Airflow convertible would be good. For that matter, we don’t know if a standard Airflow is good. The electric crossover was only recently revealed in concept form, and a production model won’t hit the streets until 2025. The Airflow’s shape, however, is generally a pleasing one. And its lowish crossover profile isn’t as chunky and upright as that of, say, the Nissan Murano. We all know how well that convertible crossover experiment went over.

Could a Chrysler Airflow convertible be better? X-Tomi Design on Facebook already stepped into that world with an unofficial rendering depicting how such a vehicle might look, and you know what? It’s surprisingly good. It helps that, in addition to removing the roof, this rendering also converts the Airflow to a two-door vehicle. The rake angle of the windshield seems the same, but the A-pillar is a bit shorter. The wheelbase looks the same as well, and while the sides are a bit tall compared to a typical convertible, it doesn’t have nearly the same awkwardness as the infamous two-door Murano CrossCabriolet.

All that said, we don’t expect to see any sort of convertible version from Chrysler when the Airflow enters production. Designed as a five-passenger electric crossover, the Airflow will herald an electric revolution at the storied American brand that will see all Chrysler products fully electric by 2028. Still, should designers fancy a new convertible in the lineup, it’s nice to know the Airflow could be an attractive option.