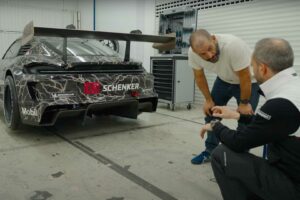 Porsche has already announced that it will produce electric sports cars in the future and it just revealed a one-off electric racer based on the current Cayman. Called the 718 Cayman GT4 ePerformance, it has full competition aero and runs two upgraded motors that can give it a combined 986 hp horsepower and briefly even up to 1,073 horsepower.

There is a lot to talk about with this car, but if you want to experience what it looks and sounds like on the move, Chris Harris drove it for the Collecting Cars YouTube channel and he also had quite a long and interesting chat with Matthias Scholz, Porsche’s GT racing vehicle project manager and the manager behind this particular project.

Scholz is keen to point out that this particular vehicle is not a preview for a future sports car, but Porsche would like to create a one-make series centered around a vehicle very similar to this one. And judging by the kind of fun Chris Harris sounded like he was having behind the wheel, this is a very fast and exciting car and seeing a couple-dozen of these racing around a track would be quite the spectacle.

Harris first takes the electric Cayman out for a spin and is immediately impressed by how strong the acceleration is, even though for his first run, the vehicle was not set up to deliver maximum power. He takes it out again in the latter part of the video with the power cranked all the way up and really notices the difference – he points out that you really have to be cautious and not forget to brake, since the speed it picks up can be deceiving.

But he is very pleased with how this electric racing car behaves, making him more hopeful than before for the future of sports cars once the industry eventually fully switches to EVs.