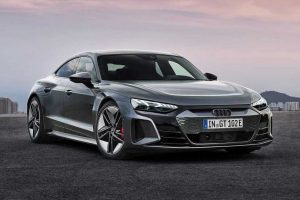 He also thinks the previous RS6 Avant looked better than the latest model.

Whenever Chris Harris is interviewed, we’re all ears as he always has some interesting things to say. Top Gear’s Jack Rix sat down and had a chat with the journalist/racing driver/TV presenter about Tesla and EVs in general, but the discussion then moved on to the recently unveiled Audi E-Tron GT. Harris said Ingolstadt’s sports sedan looks “fantastic” and he has no issue with Audi putting the RS badge on an electric car.

He went on to describe the E-Tron GT as a “Taycan with a slightly better-looking set of clothes.” This statement comes from a man who is actively thinking about buying the Porsche version but hasn’t made up his mind just yet. Harris says he’ll probably buy an EV in the next 12 months, with his heart telling him to buy the Taycan. However, the Tesla Model 3 might be the smarter choice due to the better charging infrastructure.

With Porsche coming out with a Taycan Cross Turismo that will be followed by a low-slung Sport Turismo, Harris thinks Audi is also cooking up an electric wagon. As a matter of fact, a report published by Auto Bild in December 2020 indicates a long-roof version could happen as early as next year, but nothing is official at this point.

While the Top Gear UK host says it’s nice to talk enthusiastically about electric cars, he believes these high-end models are “vastly expensive.” He makes a valid point considering the base E-Tron GT kicks off at $99,990 while the RS version starts at an eye-watering $139,990. For people with even more money to spare, you can spec a Taycan Cross Turismo Turbo S to over $240,000.

Depreciation is also a concern, along with the fact in two years from now the range of an EV could increase significantly given how automakers are heavily investing in the development of zero-emissions models. Just yesterday, Mercedes announced the EQS with the large 108-kWh battery pack will do 478 miles (770 kilometers) in the WLTP cycle, and you can rest assured it won’t take long before another automaker will beat that number.

Speaking of range, Chris Harris jokes around saying automakers shouldn’t talk about it in terms of the distance traveled or how much time it takes until the battery is depleted. Instead, companies should advertise an EV’s range in the context of how long it takes the driver until the next stop to a restroom. Harris says he’d probably need an electric car with an 800-mile range, but his kids have to stop more frequently.