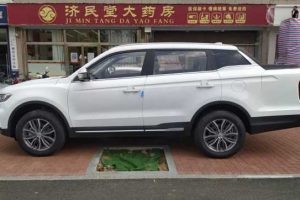 What the? Yes, it’s a Monday morning but what you’re seeing is real, as real as the full work week ahead. This is the Farizon FX, and it’s a pick-up truck version of the Geely Boyue Pro. Now, did a random China company rip off the Boyue Pro and stick a tiny truck bed on it? Surely it’s too crude to be a genuine Geely product?

Yes and no perhaps. According to CarNewsChina, Farizon is a brand of Geely Commercial, which is the CV division of the Chinese carmaker that is consistently rolling out good looking cars with original design. Many commercial vehicle brands want a piece of the passenger car segment, which is profitable and well, cooler. Maxus, an SAIC brand, is a successful example of this shift.

This Farizon FX is not the best example. As you can see, it’s nothing more than a Boyue Pro with a different grille (expanding cosmos is out, replaced by vertical slats) and a truck bed tacked on.

It’s all Boyue, including the interior and up to 80% of the profile from the looks of it, before the bed sprouts out. The sides of the bed has some continuation of the SUV’s body lines, but the rising nature of those lines mean that the bed is very high sides. Very awkward.

There’s nothing very unique about the rear end, which has standard pick-up style vertical tail lamps at the sides (Geely wording in the lens), a chunky stepped bumper, a chrome handle for the tailgate and the manufacturer’s name stamped into it. For the latter it’s Geely and not Farizon.

The small bed has a sport bar and the floor has some yacht-inspired wood flooring, and there’s a tonneau cover too. The only good thing about such a car is that the size of the SUV’s cabin is not compromised – it has exactly the same wheelbase and passenger compartment as the Boyue.

Of course, the Boyue is available in Malaysia as the right-hand-drive Proton X70, but there’s no need to ask if this will be considered for our market – it’s just too weird and this will surely remain as a China-special, one of the many funny cars you’ll find in the world’s largest auto market.