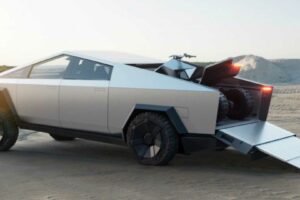 Tesla unveiled the Cybertruck study in 2019, and in order to demonstrate the cargo and load capacity in the bed, the manufacturer created an electric Cyberquad that was driven onto the truck at its unveiling. We’re not sure how convinced Tesla was that it had to produce the quad before the unveiling, but afterward, based most likely on positive public reaction, it was announced as an option for the Cybertruck.

Not much has been said about it since then, and probably the most exciting Cyberquad-related development did not involve Tesla at all. It was Rich Rebuilds who decided that he wanted to recreate the Cyberquad, which he did, and in the process he also discovered that the quad used by Tesla during the Cybertruck unveil was, in fact, based on a Yamaha Raptor 700 chassis.

The reason why we probably haven’t heard much in the way of official Cyberquad-related news has to do with the fact that the Cybertruck has been postponed several times. However, now that Tesla has confirmed that its electric ATV is coming and now it has launched a design competition for teams of university students and researchers to come up with a battery pack design created around the 2170 cylindrical battery cell.

There’s also a prize involved, the equivalent of around $30,000 for the winning team. What strikes us as being somewhat strange is the fact that Tesla may use the winning design in the finished production Cyberquad – why is it crowdsourcing this design, as opposed to just creating it in house?

Well, it would not be the first time that Tesla looked to the public for design resources in China. Previously, the manufacturer announced that it was searching for someone to lead its Chinese design team, the one working on the so-called $25,000 Tesla. For the Cyberquad battery pack, Tesla is specifically looking for interested teams of university students, as well as what it calls ‘innovation and research teams.’

The Tesla Cybertruck is set to go into production and begin deliveries next year and it will be assembled at the newly opened Giga Texas facility. The Cyberquad, however, will most likely be completely built in China and then shipped to the US for those buyers who specified the electric quad option, this in spite of the fact that Elon Musk said it would be made in Texas, alongside the truck.