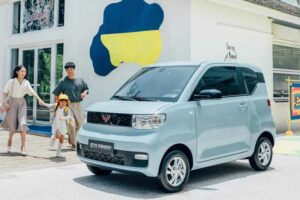 December, as usual in China, has brought a new huge plug-in electric car sales record of about half a million units.

According to the EV-volumes‘ registration data, in the final month of last year, about 502,545 passenger plug-in cars were registered, which is 125% more than a year ago.

Not only was the volume at a record high, but also the market share, which reached 21%, including 17% for all-electric cars. BEVs stand for roughly 81% of the total plug-ins sold, which means an amazing record of some 407,000 units.

That’s an impressive result, which is not far from half of the global volume (the final numbers should be released in the coming days).

Thanks to an outstanding second half of the year, on average, about 15% of new passenger cars were rechargeable (compared to 6.3% in 2020).

The secret for Wuling lies in its affordability, as the electric minicar starts at an equivalent of about $6,000 dollars.

The next two most popular models are the Tesla Model Y and Tesla Model 3 – both with new monthly records in December.

The monthly top five is completed by two BYD plug-in hybrids – Qin and Song. It’s worth paying attention to those two, especially since together with all-electric versions, they sell in really high volume.

Results for the month:

The first four spots for the year are the same as for the month – Wuling Hong Guang MINI EV, ahead of the Tesla Model Y and Tesla Model 3 (see the full report about Tesla in China here). The two Tesla models counted together noted 320,426 units. That is still over 100,000 below Wuling’s best seller.

It’s worth noting Li Xiang One EREV at #5 with 90,491 units. It’s a plug-in hybrid in a series configuration. Then, we can see two more BYD models, including the flagship BYD Han EV.

In terms of the top plug-in brands, BYD is on the top:

Among the automotive groups, the number one happens to be SAIC (19%) – including SAIC-GM-Wuling joint venture (between SAIC, GM and Liuzhou Wuling Motors). BYD (18%) and Tesla (10%) completes the podium – those two also noted the highest growth rate among the top 20 brands (BYD +78%, Tesla +198%). The Volkswagen Group has 4%.