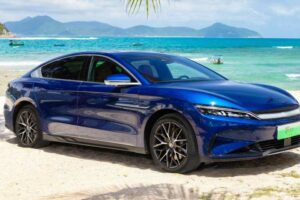 Sales of plug-in electric vehicles in China, where they are called New Energy Vehicles (NEV), are very strong this year.

With five months to go and more than half a million units sold per month, 6 million appears to be not only possible but maybe even a bit cautious. Especially because the final months of a year are usually the strongest in China. We would not surprised if the volume would increase to 1 million units a month within the next 12 months.

It’s worth noting that in July, NEV share out of the total Chinese car market was above 26% (both, wholesale and retail sales).

China is clearly on the rise with many new models in the pipeline. However, if the penetration is above a quarter of the total market right now, the growth might slow down in the coming year or two.

For Chinese manufacturers, it’s a crucial time. If they want to continue to grow at a current rate, they have no choice but to expand beyond China (which some of them are already doing). And the only plug-in markets big enough to matter in the next several years, are Europe and North America.

It’s worth paying attention, especially to the BYD, which reports more than 162,000 plug-in electric car sales, including over 4,000 exported – the highest monthly result that we have seen so far (after over 2,000 in May, which was the previous record).