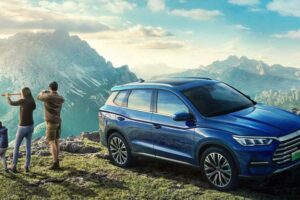 The passenger car market in China expanded by 29% year-over-year in August, thanks to registration tax reductions for some ICE models (engines below 2,000cc and price up to 300,000 CNY / $42,100), as well as ongoing growth of plug-in models.

The plug-in electric car segment almost doubled compared to a year ago to a near record level.

According to EV Volumes’ data, shared by Jose Pontes, some 552,000 new passenger plug-in electric cars were registered in China in August, which is 92% more than a year ago and about 60% of the global plug-in car market.

Market share of plug-ins improved to 30%, including 22% BEVs and 8% PHEVs. We guess that in both cases, the number will be even better later this year.

Results for the month:

So far this year, over 3.4 million new passenger plug-in electric cars were registered in China – that’s more than in the entire year 2021.

According to the China Passenger Car Association (CPCA)’s updated forecast, some 6 million passenger plug-in electric cars might be sold in China in 2022.

In August, BYD continued to be the main electrification force in China, putting several of its models in the top 10 for plug-ins (all plug-in versions counted together).

Interestingly, both the Song and Qin families were above the Wuling Hong Guang MINI EV, with the Tesla Model Y just off the podium.

The BYD Song is currently really strong with 36,791 PHEVs and 5,688 BEV registrations (new record levels). Who knows how high it might go – maybe even 50,000 per month total?

Overall, the entire market is booming and it appears that most of the models set new or near-record results.

* BEV and PHEV versions of the same models were counted together in the source.

Year-to-date, the Wuling Hong Guang MINI EV remains the market leader in terms of volume, but its advantage over the BYD Song (BEV + PHEV) decreased.

The BYD Qin family, on the other hand, strengthened above the Tesla Model Y, despite Tesla having a really good month.

If we compare brands, it turns out that BYD is on track to take a third of the market.

Top brands by share in the plug-in segment year-to-date:

Top automotive groups by share in the plug-in segment year-to-date: