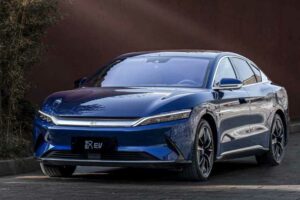 BYD reports another record month for plug-in electric car sales, which contributed to the overall record result for the year 2021.

Last month, the Chinese manufacturer managed to sell* 92,823 plug-in cars (almost entirely in China), which is 236% more than a year ago.

This result is the seventh consecutive monthly record. The previous highest monthly result was 90,121 in November.

All-electric cars were in the majority last month, but the growth of plug-in hybrids is unmatched.

BYD explains that the success of 2021 is a result of the core technologies including the BYD Blade Battery (LFP chemistry, cell-to-pack and structural element of the pack – see info here), DM-i (BYD’s latest plug-in hybrid system), as well as the all-new e-platform 3.0. On top of that comes the attractive design of new models.

The BYD Han EV is second for the year (over 87,000) and is selling at a record rate in recent months.

However, the third one – Song DM plug-in hybrid – with nearly 80,000 in 2021 was not far away and actually posted higher monthly results, including over 15,000 both in November and December. In other words, PHEVs are taking over the Han EV.

The BYD Dolphin (the first car based on the all-new e-platform 3.0 platform and the first of the Ocean series) recently crossed 10,000 units per month for the very first time.

Here is the rank of models year-to-date:

In 2022, the lineup will be reinforced by the all-new Yuan Plus EV (the second car based on the e-platform 3.0 platform), as well as other models.

We are curious what will happen with the BYD D1, envisioned for ridesharing, which did not take off.