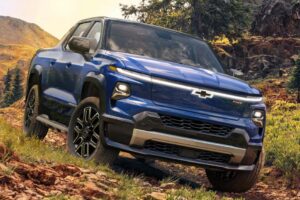 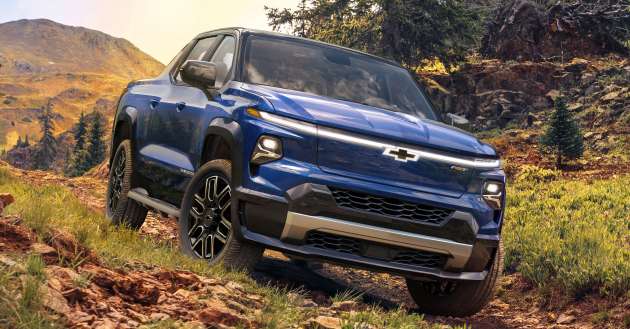 Chevrolet has unveiled the Silverado EV, a fully electric pick-u truck that is based on the General Motors Ultium EV platform. Two variants of the Silverado EV are present at launch – the RST First Edition, and the more utilitarian Work Truck (WT).

Powering the electric drivetrain is a 24-module Ultium battery pack, supplying power to a pair of electric motors which provide all-wheel-drive in both launch variants. The Crew Cab (double cab) body layout is the sole body configuration offered in the Silverado EV range.

Both the RST and WT variants of the Silverado EV support DC fast charging at up to 350 kW, which translates to the replenishing of 160 km of range in 10 minutes based on internal estimates, says Chevrolet. An accessory power bar can be used to tap into the PowerBase system of the Silverado EV, which offers up to 10.2 kW of power through up to 10 outlets for work site power tools, appliances or recreational equipment.

The use of an electric powertrain means the space in front that would traditionally be the engine bay is now the eTrunk in the Silverado EV, where the lockable, weatherproof compartment serves as a front trunk, or frunk. This will fit a large hardshell suitcase, and can be paired with a range of accessories for both fleet and retail customers to suit differing needs, says Chevrolet.

The base WT is rated to produce 510 hp and 833 Nm of torque, enabling a tow rating of 3.6 tonnes and a payload capacity of 545 kg. Following the market launch of the Silverado EV, the battery-electric pick-up truck will be offered with a Max Tow package for a trailer load capacity of nine tonnes, says Chevrolet.

Meanwhile, the higher-specification RST gets an uprated pair of electric motors which are rated to produce 664 hp and 1,057 Nm of torque in Wide Open Watts mode, offering the top trim level a maximum trailer load rating of 4.5 tonnes and a payload capacity of 590 kg. In terms of peak sprinting performance, the RST does the 0-96 km/h measure in under 4.5 seconds, according to an internal General Motors estimate.

Mutli-Flex Midgate on the RST variant. Click to enlarge

The top RST variant features the Multi-Flex Midgate, which is essentially an opening between the cargo tray and the rear of the cabin to extend the Silverado EV’s load-carrying capacity for outsized payloads; in essence, a through-loading facility such as those in sedan cars. This expands the length of the five-foot, 11-inch (180 cm) cargo tray to nine feet (274 cm) with the Midgate open.

The RST variant can also be specified with the Multi-Flex Tailgate with power release that offers a partial opening of the tailgate, and also comes standard with the Advanced Trailering System. Both RST and WT variants receive a Tow/Haul mode, trailer hitch provisions, integrated trailer brake controller as well as hitch guidance.

For its chassis, the Silverado EV gets independent suspension layouts front and rear, fitted with adaptive air suspension that can raise or lower the vehicle by up to 50 mm. Manoeuvrability is aided by four-wheel steering to reduce the Silverado EV’s turning radius at lower speeds, while improving stability at higher speeds especially when towing a trailer. The RST variant gets 24-inch wheels.

Inside, the cabin of the RST variant contains a modular console that has a capacity of just over seven gallons (26.3 litres), in other words, room for a lunch cooler box. In the second row, a 40:60 split-folding rear bench accommodates the aforementioned Multi-Flex Midgate through-loading facility.

Infotainment in the Silverado EV comes courtesy of a 17-inch lCD freeform display, accompanying the 11-inch driver’s instrument panel. These are joined by a 14-inch driver head-up display (HUD). The Silverado EV is also Chevrolet’s first application of Ultifi, a Linux-based software platform that is developed in-house by General Motors and separates hardware from software to enable rapid and frequent software updates, says Chevrolet.

The Chevrolet Silverado EV will be manufactured at General Motors’ Detroit-Hamtramck Assembly Center, also known as Factory Zero, which is an existing location that has been retooled and repurposed for the production of electric vehicles, including the Hummer EV.

The fully-electric pick-up truck will make its sales debut in the spring of 2023 as a 2024 model, starting with the WT variant boasting the line-up’s longest battery range at over 640 km. This will be followed by the RST First Edition with a battery range of 640 km, which will be priced at US$105,000 (RM441,525).