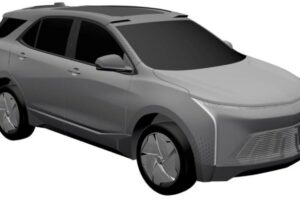 SAIC, the Chinese partner of General Motors, recently submitted a patent filing with the China National Intellectual Property Administration of what looks like an electric or gasoline-electric hybrid SUV based on the Chevrolet Equinox. No doubt, the vehicle in these illustrations shares a number of distinct features with the Equinox, including its forward-sweeping C-pillar, doors, and greenhouse. It also seems to incorporate styling cues from the 2022 Chevrolet Bolt and Bolt EUV.

In fact, this potentially electrified Equinox reminds us of something lurking in the shadows behind Mary Barra back in November. No, that’s not a weird metaphor or a set-up for some hokey horror movie joke. It’s actually an observation from a video recording of a call the CEO had with investors in November 2020.

Two pieces of context here: The Equinox is a global vehicle, and SAIC builds a version for its home market. Secondly, SAIC is betting big on EVs, with many battery-powered cars already in production and many more planned. Building a global electric SUV that’s well-suited for China and the United States alike (à la Buick’s Envision, which is assembled by SAIC-GM and sold in America) seems like a sensible business decision on GM’s part. It seems only time will tell, if—or when—Chevrolet brings an electrified Equinox to market.