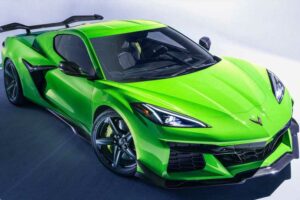 Chevrolet’s one-of-one Non-Fungible Token (NFT) auction that included a rear-life car ended last week without a bid. The five-day auction, which included exclusive NFT artwork by xsullo and a custom-colored Corvette Z06, attracted zero bidders. SuperRare, which hosted the NFT auction, extended it for an extra 24 hours after the initial closing, but it still ended without receiving a bid.

Chevrolet spokesperson Trevor Thompkins told CorvetteBlogger, which followed the auction, that the company’s “first step into Web3 has been educational, and we will continue to leverage technology to benefit our customers.” The minimum bid started at 206 ETH (or well over $230,000 during the auction period). Proceeds from the auction were supposed to benefit DonorsChoose.

The auction winner would not have only received the NFT but also a one-of-one real-life Corvette Z06 with an exclusive “Minted Green” exterior color. The car was supposed to arrive with the Z07 Performance Package, carbon-fiber wheels, and a few other unique features. The Z06 will pack a 5.5-liter flat-plane crankshaft V8 engine that makes 670 horsepower (500 kilowatts) and 460 pound-feet (623 Newton-meters) of torque.

According to the contest rules, Chevrolet hasn’t built the special Corvette and wasn’t planning on it until the auction ended. However, with zero bids, we doubt Chevrolet will move ahead with building it, all but abandoning the project. It’s not all for nothing, though, as Thompkins also told CorvetteBlogger that it would “take what we’ve learned and apply it to future projects.”

Chevrolet hasn’t been the only automaker to experiment with NFTs nor the only automotive-related NFT to falter. Pininfarina had to extend an auction for five Ferrari Modula concept NFTs that failed to meet the reserve price. Nissan, McLaren, Lamborghini, Hyundai, and recently Bentley ventured into the NFT space.

Web3, NFT, and crypto technologies are still in the early stages of development and adoption, and it could be a while before they gain mainstream popularity in a usable way. So far, only a handful of automakers have explored NFTs, and it’ll be interesting to see how automakers approach the tech as it matures.