Check Out This Highway Hit And Run Caught On TeslaCam 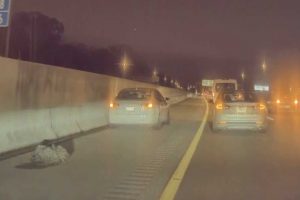 Highway hit and runs are scary, that’s about the last thing you want to happen to you when cruising down the interstate. In most cases, there isn’t a camera recording and you have to be fast and catch the make and model of the vehicle that hit you and hopefully the license plate as well. Fortunately for Tesla owners, there are cameras recording the drive and those cameras are appropriately known as TeslaCams.

This video shows a classic case of a highway hit and run that happened in Memphis, TN. It appears the Tesla slowed down a little abruptly due to traffic, something that happens all the time. Unfortunately for the Tesla, the driver of an older white Hyundai Elantra behind it probably wasn’t paying attention and didn’t have enough time to brake before hitting the Tesla’s rear left bumper.

The driver of the white Elantra tried to swerve to avoid impact but didn’t react fast enough. After he swiped the rear of the Tesla, the driver slowed down for a bit on the shoulder of the highway but then quickly got back in the fast lane, cutting off the Ford Fusion in front of the Tesla, almost hitting it as well. The Elantra driver then continued to cut off the person in the next lane and drove out of sight. They were likely racing to the nearest exit.

It’s hard to say if the driver of the Elantra will be caught because the license plate is almost impossible to read. On another note, those with a keen eye will notice the Elantra had an unpainted front right fender, probably from a previous accident, hopefully not from a previous hit and run.

Let us know in comments if you can make out the plate and, if so, we’ll send the info along to the Tesla owner.