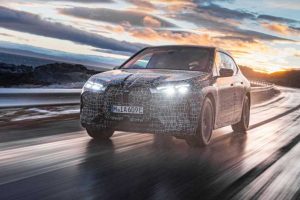 BMW says it made sure the iX will cope with the most extreme of low temperature environments.

One of the draws of buying an SUV over a regular car is the feeling it gives you that you can, if you wanted to, take it to some remote, extreme place where a lower car would never go. Most SUV owners will never actually do it, but manufacturers still make sure their vehicles are capable, and the new BMW iX is no exception.

The Munich-based manufacturer recently released a set of photos showing a camouflaged iX testing in Europe’s frozen north, namely in Norway and Finland, all the way to the edge of the Arctic Circle. What specific tests did BMW subject the iX prototype to?

Well, as you can imagine, special attention was paid to how the battery pack reacted to low temperature extremes over prolonged periods. BMW also looked at how the car charged in these conditions, in order to make sure end users don’t encounter problems – the iX will undeniably be popular in Norway, a country with long, harsh winters that is simply in love with the electric vehicle, so future owners can have peace of mind that the vehicle won’t let them down in the middle of winter.

‘ Suspension control systems have to prove their functionality and reliability in particularly demanding road and weather conditions. In the process, test engineers evaluate above all the interaction between drive and suspensions systems on road surfaces with a low friction coefficient. Unsecured tracks, icy roads and ice surfaces especially prepared for test-driving on the edge of the Arctic Circle offer the ideal conditions to precisely coordinate the motor control technology, the electric four-wheel drive and suspension control systems right up to the limits of longitudinal and lateral vehicle dynamics. ‘

Even though not everybody likes the way the iX looks from the outside, this will certainly not deter people from buying it for different reasons. Firstly, it’s a dedicated BMW electric SUV, and there’s appeal from that formula alone, but it will also provide more than 600 km WLTP range (or 300+ miles according to the EPA’s test cycle) from a 100+ kWh battery pack, 500 horsepower and a claimed 0 to 100 km/h (62 mph) acceleration time of under 5 seconds.

The iX will enter production towards the end of 2021, so it’s still one year away, and the final, official specs have not yet been released. This post, however, is about this excellent photo gallery of the iX testing in the frigid fringes of the Old Continent.