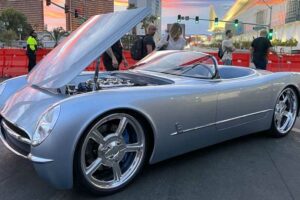 Dave Kindig and his company Kindig-it Design have built two wild roadsters with a look inspired by the 1953 Chevrolet Corvette and have a potent powertrain. Rather than the original fiberglass body, these silver and white cars now use carbon fiber panels. The result is a striking retromod.

The design evokes the early, single-headlight Corvettes, but with some subtle changes. The portion of the body behind the rear doors seems a bit longer, and the shape of the front wheel well lacks the teardrop effect from the rear edge on a real ‘Vette.

Keep in mind that the ’53 Corvette was the first year of the now-famous sportscar, but the only engine available for it was a 235-cubic-inch (3.85-liter) inline-six making 150 horsepower (112 kilowatts). That means the vehicles from Kindig-it Design have roughly 4.5 times the power of the original car.

While the rest of the vehicle looks retro, the wheels are a five-spoke design from Forgeline, and they measure 21 inches in front and 22 inches at the back. The look is a bit too modern to fit with the rest of the aesthetic to our eyes. The Michelin Pilot S4 tires should provide plenty of grip, though.

There are now Wilwood disc brakes instead of the original drums. They should be much more capable of bringing these beasts to a stop.