Check Out The New Xos Electric Semi And Delivery Trucks 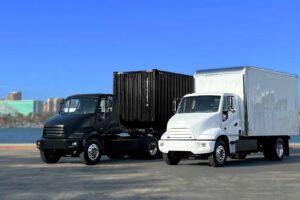 Xos Trucks is a heavy duty electric vehicle startup founded in 2016 in Los Angeles, California. Until recently, it electrified existing trucks and also sold its own BEV delivery van (known as a step van), but now it has also revealed a larger medium- and heavy-duty truck, shown both as a semi tractor and as a delivery truck.

The semi is called Xos HDXT, a class 8 electric tractor, while the box version, available as either a Class 6 or Class 7 medium-duty truck, is known as MDXT. The semi is rated to tow a payload of up to 56,000 pounds and it has 798 horsepower, while range is rated at between 110 and 230 miles on one charge depending on payload and other factors.

The manufacturer says you can charge the HDXT at 350 kW, so one and a half hours are enough for a full charge, at least in theory. Propulsion is provided by Allison e-axles from the new eGen dual-motor series, either one 100D for the 4×2 model and two 100S axles for the 6×4 version.

The MDXT delivery variant is less powerful, with a rating of 350 horsepower, but it does offer more range, between 130 and 270 miles. Maximum payload is 20,000 pounds and the gross vehicle weight rating (basically its total weight including payload) is 33,000 pounds. Power ratings range from 401 to 469 horsepower and charging is done at a slower rate, 150 kW maximum, via a CCS connector.