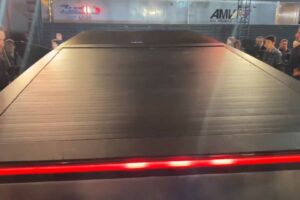 A patent application suggests Tesla has a solar charging tonneau cover in the works for the upcoming Cybertruck.

The next iteration, hopefully, the production version, of Tesla’s Cybertruck should prove to be quite different from the prototype. Questions still remain about its size (ummm, garage-compatible?) and some of the forthcoming design tweaks. But one production-ready feature, teased via a recent Tesla patent application, really seems to stand out.

It turns out that a Tesla Cybertruck patent application recently surfaced on the websites of the US Patent Office (USPTO) and the World Intellectual Property Organization (WIPO).  It’s likely this patent application hints at Tesla’s eagerness to start Cybertruck production soon — sometime later this year at Giga Texas.

Okay, so what did the patent application reveal? It looks like Tesla could have a solar charging tonneau cover in the works. To be clear, the solar charging bed cover was already teased during Cybertruck’s launch event — but this patent provides a definite sign that Tesla actually intends to take this to production. Back in 2016, Elon Musk had actually hinted at a solar car roof for the Tesla Model 3 on Twitter. And Tesla partner, Panasonic, has long been producing solar car roofs for the Toyota Prius plug-in hybrid and Nissan Leaf as well. That said, a solar-powered tonneau cover would be something wholly new for the pickup truck segment.

That said, it’s not clear how much energy the solar cells (from the tonneau cover) will be able to “charge” back into the Cybertruck battery pack. According to some online observers (and their guesstimates), the size of the bed cover should be able to generate some 500 – 900 watts of energy for charging the battery on the go or while camping in the wild.

Regardless of the actual solar power available, it’ll be nice to drive the dark, ominous, apocalyptic Cybertruck on shiny rays of sunshine.

Written by: Iqtidar Ali. An earlier version of this article was originally published on Tesla Oracle. Revised update edited by EVANNEX.