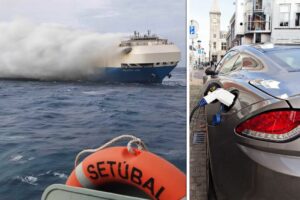 The heightened appeal for electric cars may be causing a wave of cargo ship fires because they are not designed to carry lithium batteries safely. The new report, from Allianz Global Corporate and Specialty, said that bigger vessels carrying as many as 8,000 vehicles at a time concentrate the risk.

Lithium batteries, which are used to power electric vehicles, are generally safe, but can heat up and combust if they are faulty.

The warning from the insurance firm comes just months after a car carrier caught fire and sank into the Atlantic Ocean.

The Felicity Ace was carrying 4,000 Volkswagen vehicles including Porsches and luxury Bentley vehicles.

The ship sank to the south of the Azores, with analysts estimating the total loss to be between £271million and £325million.

It is unknown whether the fire was caused by an electric vehicle, although the Azorean harbourmaster said lithium-ion batteries had ignited.

The report states that fires have become a major loss driver for car carriers, especially when they start in cargo holds.

Older ships are fitted with fire containment systems that were not designed to cope with chemical fires.

They are often caused by malfunctions or electrical short circuits in vehicles, while the open decks can allow them to spread quickly.

The growing number of electric vehicles transported by sea bring further challenges, given that “existing countermeasures may not respond effectively in the event of an EV fire”.

It adds that losses can be expensive, given the value of the car cargo, the cost of wreck removal and pollution mitigation.

Justus Heinrich, Global Product Leader Marine Hull at Alliance said: “A number of recurring themes have emerged in major incidents in recent years, many of which are a consequence of the increased size of vessels.

“As vessels have grown larger, values at risk have increased, while the environmental bar has been raised.

“However, regulation, safety management systems and salvage capabilities appear to have not always kept pace.”

The cargo ship fires can also be very dangerous to human life.

Although all crew on the Felicity managed to escape unharmed, a 2018 fire on the Maersk Honam claimed the lives of five of its 27 crew after chemicals caught fire.

Despite the recent cargo ship fires, Allianz found that there has been a 57 percent decline in the total shipping losses per year since 2012.

Allianz heralded the “impressive” safety improvements that have been made in recent years.

Contained ship sizes have increased by 1,500 percent since 1968, with Allianz warning that ever-more sophisticated fire-fighting systems would need to keep up with the challenges posed.