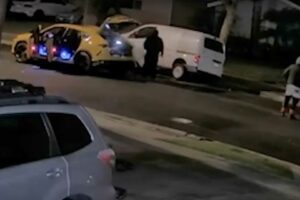 What do thieves drive? A beat-up sedan? A sketchy panel van? An old truck? We’re o experts in thievery but I think we can all agree that thieves should drive cars that don’t attract attention to themselves.

But these thieves from Torrance, California beg to differ and opt to drive something that’s the opposite of being low profile. Caught in a CCVT footage originally posted by the Torrance Police Department, a group of men was seen alighting a yellow Lamborghini Urus after parking beside a white van. The target? Well, of course, the precious catalytic converter that has become the subject of theft in recent years.

According to the police, the incident happened on November 9, 2022, at around 4:00 a.m in the 3800 block of 184th Street. The CCTV footage caught the four male suspects in action, with one of them acting as the lookout while the others proceeded with the criminal act.

The footage, however, failed to capture the license plate of the vehicle, though the police mentioned that it had black wheels.

Earlier this month, the United States Department of Justice stopped a multi-state catalytic converter theft ring. The indictment involved 21 people from across five states and sought the forfeiture of over $545 million in assets.

“Last year approximately 1,600 catalytic converters were reportedly stolen in California each month, and California accounts for 37% of all catalytic converter theft claims nationwide. I am proud to announce that we have indicted nine people who are at the core of catalytic theft in our community and nationwide,” said US Attorney for the Eastern District of California Phillip A. Talbert.