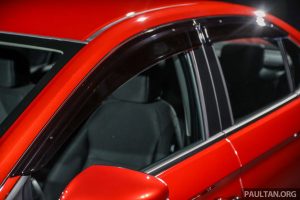 The enthusiast view is usually not the popular view, although fans often think of themselves as essential to the business and survival of a brand. It’s like that in the world of watches (no date, please), and cars as well (why no manual?). Newsflash: the manufacturers know what they’re doing; you don’t like it, but there are likely 99 others who do.

We’re putting our hands up when it comes to door visors a.k.a. window visors. You know, those plastic strips stuck on the top part of car windows? To most of us here, those things are not just unnecessary, but it detracts from the looks of the car. One or two kitted examples aside, and apart from wheels, the paultan.org garage is mostly stock and clean.

But that’s just us, and when it comes to accessories, to each their own, right? Here, we’ll take a look at window or door visors, what are they for, and the pros and cons of this popular accessory. Visors aren’t new. Those who grew up riding in the Proton Saga would remember them from an early age. Older pre-Proton Japanese cars had shiny metal “awnings” as door visors – remember those? Door visors started life as a functional item; having them means that one can open the windows slightly without rain coming into the cabin. This was useful back in the day when air-con was not standard fit on all cars.

Even when air conditioning became commonplace, there were old-timers who didn’t drive exclusively with AC on, and we’ve all heard of the “turn off AC for extra power” trick. Smokers who have the habit of lighting up in the car would also appreciate being able to open the windows slightly.

So, when natural ventilation is needed when driving, door visors come into play. Conversely, windows can be left slightly open when parked to avoid an oven cabin – no worries even if it rains. But do people drive with windows slightly down these days (I do drive with windows fully down sometimes, but that’s not relevant in this context), and do people park their cars – in Malaysia – with windows open? Of course, there’s also the perception that door visors are cool and improve the looks of the car. We don’t agree, but to each their own. What’s more universal is that the addition of door/window visors may introduce or increase wind noise.

Also, visors aren’t part of any car’s original design, so those precisely calculated aerodynamics would be affected by the extra addenda. As we all know, drag is an enemy of fuel economy, although in this case, the difference would be small. Lastly, if visors aren’t installed properly, there’s a potential for the plastic boomerangs to breakaway from the car at speed, and that’s not good for you or other road users.

So there you go, door/window visors and its pros and cons – did we miss anything? The good thing is that visors aren’t standard fit in the market; usually, it’s one of the items in an accessory package, so you pay for it only if you want it. Perodua (GearUp), Honda (Modulo), Proton and many brands have visors as add-ons, and who can blame them for making extra profit when the demand is there.

Are you a fan of door visors, or you don’t get why people spend money on it? Why?