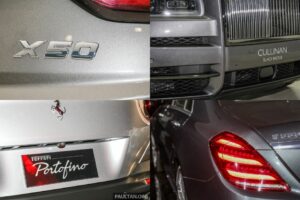 A car’s model designation is its name, which is at the top, or at least near the top of a list of elements that make up its identity, and certainly one among few that make impressions the soonest.

Like reputation, a name tends to precede an entity; the phrase “Have you seen the just-launched [insert car name]?” or similar indicates that what it is known by tends to come before everything else about the car. Car model designations tend to fall into one of two camps – alphanumeric or a more evocative name, though often combinations of the two are used.

For some automakers, one approach has been favoured over the other, such as Proton with the Persona, Iriz, Exora, Saga and the like. However, the national car brand appears to be pivoting towards alphanumerics, at least with the recently introduced SUV model lines which are the X70 and X50.

While Proton has added alphanumerics to its existing model range through the introduction of the X50 and X70, Volvo is will be doing away with them, with the Concept Recharge the first of its new direction

By way of Geely, brand relative Volvo has gone the opposite direction with its naming convention, as it has just elected to dispense with its traditional S, V and XC prefixes as well as variant designations such as T8 that have historically comprised the vast majority of its product line. There have been exceptions, such as the 121/131/221 ranges which were collectively also known as the Amazon. What say you, readers – would switching to specific names be a good idea for Volvo?

Fellow Swedish brand Koenigsegg appears to have steered towards a similar direction. The supercar maker’s early years featured the CC of 1996 two years after the company, Koenigsegg Automotive was formed, which gave rise to derivatives CC8S, CCX and CCXR before the advent of the Agera in 2010, marking the start of ‘proper’ names such as the Regera, Jesko and Gemera.

Also at the luxury end of the automotive spectrum is Rolls-Royce, which uses names almost exclusively for its production vehicles such as the Phantom, Ghost and Wraith, even for special editions such as Black Badge, Neon Lights and Iridescent Opulence.

Meanwhile, Ferrari has used a combination of the two right from its formative years, the 166 Inter of 1948 coming shortly after the 125 S and 159 S racers of the year before.

More recently, the Italian marque appeared to alternate between name-and-alphanumeric and just alphanumerics; the F430 of 2004 broke with convention from the 355 Berlinetta and 360 Modena of 1994 and 1999 respectively, then going back to using a combination of the two with the 458 Italia of 2009 and the F12 Berlinetta of 2012.

There are exceptions to the rule of course; track-focused edition Ferraris add names to alphanumerics, such as the 430 Scuderia and the 488 Pista to name just two, or switch out the names of the regular versions such as 360 Modena and 458 Italia for the Challenge Stradale and Speciale, respectively.

Here’s a car with a name to suit its wheelbase

Alphanumerics are used in the mainstream segments largely out of necessity. Automakers such as BMW and Mercedes-Benz have vast model ranges, most of each with just as prolific powertrain combinations, and thus the alphanumeric method is the most efficient way of distinguishing between each variant.

Most of the time, variant names remain succinct as with the BMW 530i, though there are oddities. In contrast with the concision of a name such as the Ferrari LaFerrari, this method could give rise to some truly long phrases when a car is called by its full, official name. Welcome the – draw a breath now – BMW Individual M760Li xDrive Model V12 Excellence The Next 100 Years, which premiered in 2016.

All that said, what is your preferred type of model designation, dear readers? For this writer, names take the vote, and in Italian for good measure. How else would “four-door” turn out to be as emotive as Quattroporte?