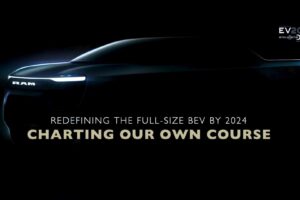 Expected to debut and enter production in 2024, the all-electric Ram 1500 pickup should find itself as a newcomer in a crowded market segment, as many of its rivals would have already launched by then.

In this context, you would expect Ram to tweak its marketing strategy significantly to promote the new electric truck, but as it turns out, the truck maker won’t have to.

Carl Lally, senior manager of Ram 1500 brand marketing, told Automotive News that the focus on capability won’t need to waver, especially since that could actually improve with an electric powertrain.

“What we’ve heard from our consumers is that they’re not looking for a compromised truck solution, so really, some of the core attributes that we communicate to our customers about our trucks, the capability and the durability, those aren’t going to change, I think, as you look forward to an EV-oriented truck product.”

He added that some changes will be made in the marketing message to place more emphasis on efficiency, for example, but “the core is going to remain very common or very similar.” This strategy is best reflected in Ram’s new brand statement, which is actually an update of the previous one. “Built to serve a sustainable planet” replaces “Built to serve,” signaling where the brand is headed as it moves forward with plans to electrify its lineup over the next decade.

The electric Ram 1500 will follow the Ford F-150 Lightning, which launches next spring, and the GMC Hummer EV pickup debuting this year, not to mention other electric pickups including the Chevrolet Silverado Electric, Rivian R1T, Tesla Cybertruck, and Bollinger B2.

Interestingly, when teasing the electric 1500 earlier this month, Ram said its e-pickup will surpass rival offerings. While it didn’t elaborate on that, the statement seems to suggest Ram’s first-ever electric pickup will be worth the wait, seeing as it will arrive after most of its competitors.

We do know it will be based on the STLA Frame body-on-frame architecture, which will accommodate battery packs ranging from 159 kWh to over 200 kWh to provide a range of up to 800 km (500 miles). The platform will also enable e-AWD thanks to front- and rear-axle electric motors, each developing between 150 and 330 kW (201–442 hp).