Home » Car Reviews » Can't Afford A Classic Pre-War Race Car? Build Your Own Like This Guy Did

Can't Afford A Classic Pre-War Race Car? Build Your Own Like This Guy Did 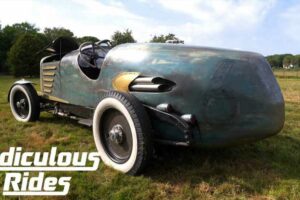 Let’s face it, purchasing a pre-war race car is way beyond most car enthusiasts’ budget leaving many of these cars to sit in collections attracting a nice layer of dust. This high cost didn’t stop Frans who built his one pre-war race car from the ground up. On Barcroft Cars’ latest YouTube video, we get a behind-the-scenes glimpse of what it takes to build your own pre-war race car.

Franz always loved the look of pre-war race cars and dreamed of owning one. Instead of purchasing a period piece, he decided to build his own. The resulting car is called Dutchie and it’s a unique creation built around a period-correct drivetrain.

Dutchie was a build inspired by the old race cars that would take on the Indy 500 in the early days of the race series. Franz designed and built Dutchie around a straight-8 engine and transmission from a stock of pre-war race car parts he acquired.

After assembling the frame and drivetrain, Franz put a chair in the spot where he wanted to sit and set about creating the car’s body. He started with a metal frame and then placed blankets to get a feel for the final result. This process allowed Franz to tweak Dutchie’s body to his exact specification.

Franz worked with a metal artist to lay sheet metal over his custom frame. The final result is a beautiful vehicle that would be right at home with a pre-war racecar while being a unique design all its own.

This beautiful creation doesn’t spend time in a museum either. Franz regularly drives Dutchie and enjoys his creation which is sure to bring a smile to the faces of onlookers who can admire Franz’s handy work.

So if you can’t afford the race car of your dreams maybe you should consider building your own like Franz.