Canoo Plans Dutch Manufacturing Ahead Of New US Factory 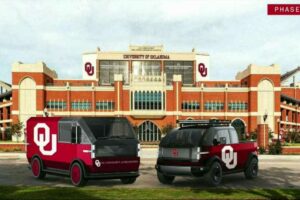 Lifestyle model will be made first by VDL Nedcar.

Today, Canoo announced its manufacturing strategy and it comes in two phases. To begin, it will partner with Dutch outfit VDL Nedcar to manufacture its first model, a people carrier called Lifestyle. While that arrangement will help bring its first vehicles to the US and later, the European market, Canoo will be building its own factory in Oklahoma.

The announcements came as the company held its first investment relations day. In fact, they were the first items on a menu of presentations that lasted over four hours. Oklahoma Governor Kevin Stitt was on hand to express his enthusiasm over the deal and do some official paper signing with Canoo CEO Tony Aquila.

That was immediately followed by the introduction of VDL Nedcar. Its CEO, John van Soerland, appeared on screen for his trans-Atlantic remarks. The arrangement is expected to see production of the unique vehicle begin in the fourth quarter of 2022. VDL Nedcar currently builds the BMW X1 and several MINI models. It is thought to have enough capacity for over 100,000 additional vehicles per year.

The Oklahoma factory, which Canoo refers to as a “mega microfactory” is expected to come online in 2023. It will sit on a campus covering some 400 acres in the MidAmerica Industrial Park, not far from Tulsa. Consisting of a paint, body shop, and a general assembly plant, it is expected to supply over 2,000 jobs for the local economy. The campus, they say, will also host a “low-volume industrialization facility.”

The “high-volume” part of the plant is expected to have the capacity to produce over 150,000 vehicles per year. Manufacturing will happen in two separate process, with one part dedicated to churning out copies of the company’s foundational Multi-purpose Platform (MPP), while the “top hats,” the upper carriage of the cars in the shape of Lifestyle and its pickup truck are made separately before being married to their chassis.

The electric vehicle landscape is strewn with failed efforts to create new manufacturers, so it’s understandable there will be some skepticism surrounding this one. Still, they do appear to be bringing new innovation at a reasonable consumer price point, so we believe there are reasons to to have hope for its success. One confidence-boosting point raised during the day: the company says it has sufficient cash to SOP launch of its first vehicle.