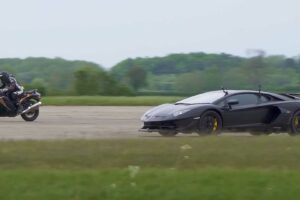 The Lamborghini Aventador SVJ is one of the most powerful and fastest in the Aventador lineup. It’s a track-focused supercar, which means it underwent an extensive diet to shave some weight. But how does it compare to a superbike like the Suzuki Hayabusa?

The 2022 Suzuki Hayabusa, also known as the GSX-1300RR, is now in its third generation. It’s mown on power compared to its predecessor while also gaining a bit of weight in the process. But given the competition here, does that even matter? Let’s check out the stats to see their differences in black and white.

The Lamborghini Aventador SVJ is powered by a reworked 6.5-liter V12 capable of producing 759 horsepower (566 kilowatts) and 531 pound-feet (720 Newton-meters) of torque, sent to all four wheels. With air-conditioning and other convenient stuff considered, it has a dry weight of 3,362 pounds (1,525 kilograms). Before the Aventador Ultimae, it was the fastest Aventador in the lineup with a top speed of 219 miles per hour (352 kilometers per hour).

With a lineage that was once hailed as the fastest production bike, the third-generation Hayabusa currently uses a 1,340cc inline-four mill. Also reworked for this iteration, this engine now makes 190 hp (140 kW) and 110 lb-ft (150 Nm) torque sent to the rear wheel. Letting go of a roof, two wheels, and a seat, the Hayabusa only weighs 582 lbs (264 kg).

It’s hard to gauge which one will actually win just by looking at the numbers. There’s also a question of skill, which is pretty important, especially when launching the superbike.

With all these things considered, can the mighty Hayabusa superbike beat the equally great Aventador SVJ supercar in a straight-line contest? The video atop this page should give you a definitive answer. Let us know your thoughts in the comments section below.