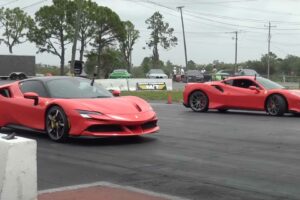 The emergence of electrification has given us hybrid supercars that are more powerful but notably heavier than their non-electrified counterpart. The give and take between weight and power when it comes to electrified models is inevitable.

Take Ferrari, for example. We all know that the SF90 Stradale plug-in hybrid supercar makes so much power from its twin-turbo V8 and the ensemble of three electric motors. However, another mid-engine V8 supercar before it, the 488 Pista, is less powerful but is also substantially lighter.

The difference on acceleration is marginal – or is it? On a sprint to 62 miles per hour (100 kilometers per hour), the SF90 Stradale needs 2.5 seconds, while the 488 Pista takes 2.9 seconds. That’s a mere four-tenths of a second gap, but that translates differently in a drag race.

YouTuber DragTimes, fortunately, had both filmed at a drag strip. Both Ferrari V8 supercars, one of them his own, battled it out in a straight-line race. As a bonus, both cars came in Rosso Scuderia paint, the brightest red in the automaker’s color options (and quite rare, if I may add).

For the uninitiated, the SF90 Stradale is up by nearly 300 horsepower over the 488 Pista. However, the plug-in hybrid was heavier by 600 pounds (272 kilograms), which was about the weight of three people. That’s a sizable difference, mind you, but the SF90 has another ace up its sleeve – an all-wheel drivetrain, which should have given it an advantage from a standing start.

That said, did the SF90’s additional power and grip advantage beat the lighter 488 Pista? The video atop this page should settle the score. As always, let us know your thoughts in the comments section below.