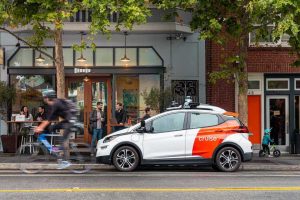 Electric and autonomous Chevrolet Bolt EVs soon will be driving in San Francisco without someone behind the wheel.

GM’s Cruise Automation recently received from California’s Department of Motor Vehicles a permit to drive its autonomous vehicles without the human backup drivers.

According to the company, it’s not the first such permission from the DMV, but Cruise will actually remove the drivers before anyone else does.

We should see a fully autonomous Chevrolet Bolt EV in San Francisco later this year. Who knows, maybe there will be no steering wheel too.

“Today, Cruise received a permit from the California DMV to remove the human backup drivers from our self-driving cars. We’re not the first company to receive this permit, but we’re going to be the first to put it to use on the streets of a major U.S. city.”

An interesting thing is that Cruise is aiming at challenging streets of San Francisco instead of some calm roads in the suburbs (with 30–40 times less complexity, according to the press release), but that’s where the automation is most needed.

“Millions of miles of testing in San Francisco isn’t the easy choice. But we focused on the hardest challenge first because it’s key to scaling our self-driving service.”

As the Chevrolet Bolt EV electric cars are used only in the test pilot fleet, ultimately, the company will be using specialized EVs, starting with Ultium-powered Cruise Origin.