Cadillac Lyriq Gets Recalled For Touchscreen That Goes Blank 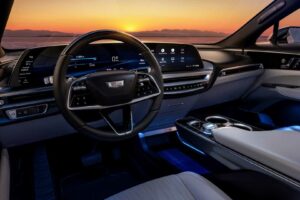 Cadillac has already issued a stop-sale order for its first electric vehicle, the Lyriq, after discovering a defect with the infotainment system’s screen.

This is the first recall for the Lyriq electric SUV, for which customer deliveries started only recently (Debut Edition models only). Fortunately for Cadillac, there aren’t that many Lyriq SUVs on US roads, as suggested by the recall notice that includes just 186 units.

The problem with the touchscreen was discovered by Cadillac employees on a Lyriq awaiting delivery at General Motors’ factory in Spring Hill, Tennessee. After workers noticed the blank display, the carmaker investigated the problem and found that it happens when someone interrupts the screen’s booting or shutdown sequence by opening a door while the vehicle is parked. If that happens, the screen can turn off.

GM explains in the recall notice that affected vehicles are equipped with a defective display screen that will occasionally perform a boot-up/shutdown cycle when the vehicle is parked and powered off.

If a vehicle door is opened, this cycle can be interrupted; if the cycle is interrupted during a specific five-second time period, the display will go blank. If that happens and the driver operates the vehicle with the blank screen, the instrument panel and other Federal Motor Vehicle Safety Standards (FMVSS) features will not be available, therefore increasing the risk of a crash.

GM opened an investigation on August 19 and included field data that found 16 related incidents among Lyriq owners. The last incident was reported on September 14, which prompted the automaker to issue a recall for affected Lyriq models a day later. General Motors is currently identifying the Lyriq vehicles with the issue and will hold vehicles at the factory until a fix can be deployed.

For the moment, Cadillac recommends owners to turn the vehicle off and on again—yes, that’s right. More specifically, the automaker says the blank screen condition will typically reset if the vehicle is turned off and back on again.

However, a more permanent fix will consist of updating the vehicle’s display screen control module software, but this operation can only be performed at dealers, not via an over-the-air software update as you would expect. GM will start notifying owners of affected vehicles starting November 7.