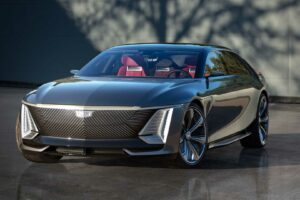 After several sets of teasers, the design of the Cadillac Celestiq show car has been finally revealed as a striking preview of the brand’s handcrafted, all-electric flagship sedan.

Inspired by the brand’s 120-year heritage, the Celestiq show car is a showcase of what Cadillac’s design and engineering teams aim to accomplish with the Celestiq production car as the project moves closer to production.

Designers and engineers took inspiration from iconic Cadillac sedans of the past such as the bespoke V16-powered coaches of the prewar era and the hand-built 1957 Eldorado Brougham. Brought to life using innovative production methods and new technologies, the Celestiq show car is said to be the culmination of that heritage.

“Those vehicles represented the pinnacle of luxury in their respective eras, and helped make Cadillac the standard of the world. The Celestiq show car — also a sedan, because the configuration offers the very best luxury experience — builds on that pedigree and captures the spirt of arrival they expressed.”

In creating the Celestiq concept, designers also drew inspiration from classic architecture, with the Ultium-based EV platform enabling them to transform their vision into reality.

The Celestiq adopts a sleek fastback sedan body style with a sloping roofline that ends with a long curved rear glass, and features defining elements such as a long hood, smooth surfaces (no door handles in sight), jewel-like LED lights, illuminated front fascia and badging, and massive aero-optimized wheels. The design language appears to be an evolution of the 2016 Cadillac Escala Concept and Lyriq electric luxury crossover.

Cadillac says the Celestiq show car consides the entirety of travel as a curated experience “intended to evoke an emotional response.”

The sumptuous interior is where that becomes most apparent, with Cadillac saying the cabin uses the finest genuine materials, exceptional detailing and innovative technologies to create a lounge-like space. Everything inside looks bespoke, from the two-spoke steering wheel to the striking red leather seats, ambient lighting and fine details.

The Smart Glass Roof allows for four zones of variable lighting thanks to Suspended Particle Device (SPD) technology for completely personalized comfort and visibility. Additionally, the 55-inch-diagonal advanced LED display integrates a passenger display with electronic digital blinds. This active privacy technology is designed to allow passengers to enjoy video content while blocking it from the view of the driver to avoid distraction.

We can’t tell you when the production version of the Celestiq will become available either, as Cadillac will reveal that at a later date. All we know is the flagship electric sedan will be the first production vehicle hand-built at GM’s Global Technical Center in Warren, Michigan, after an $81 million investment. Rumor has it the Celestiq will cost around $300,000 and will be the most customizable vehicle in GM’s history—think Rolls-Royce Bespoke levels of personalization.