BYD To Launch Two New EV Brands In 2023: Yangwang And One New 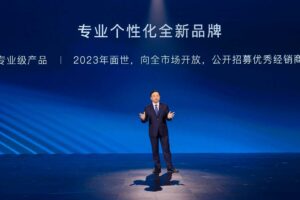 BYD, by the way of reaching a cumulative production of 3 million New Energy Vehicles, officially confirmed two new EV brands that will be launched in 2023.

According to Wang Chuanfu, Chairman and President of BYD, the company will form “a powerful brand matrix” including:

The Dynasty and Ocean are currently the two main product series of the main BYD brand, while Denza is a luxury arm that’s 90% controlled by BYD and in 10% by Mercedes-Benz (originally it was 50/50 joint venture, but Daimler reduced its stake in mid-2022).

Together with two new brands – Yangwang and one new (not yet announced), BYD Auto would like to have a total of five brands.

The Yangwang brand (仰望), announced on November 8, is envisioned as a high-end brand in the luxury segment, “with disruptive technologies and products”. The name means – in simple translation – “look up” or “looking up.”

For the purpose of the brand, BYD registered in November a new subsidiary – Shenzhen Yangwang Automobile Sales Co. Ltd.

The first model will be launched in the first quarter of 2023 with a promise of “unprecedented high performance.”

According to CnEVPost, the first model will be a hardcore off-road electric vehicle. The Chinese media already published images of camouflaged off-road SUVs, which reportedly are Yangwang test vehicles.

We are not entirely sure, but in the end, the Yangwang EV might become a competitor to the upcoming Mercedes-Benz EQG all-electric G-Class equivalent.

This new brand is promised to introduce a “novel pioneering technology,” which will be used for the first time – on top of Blade Battery and CTB (cell-to-body) structural battery. We don’t know what it iss, but maybe something related to all-wheel drive with four motors?

Besides Yangwang, BYD Auto is preparing another undisclosed brand, which will also arrive in 2023.

Here is how the manufacturer describes this new project:

“In addition, in 2023, BYD will release a new brand grounded in highly professional and personalized identities, to meet the diversified demand of consumers. The brand will harness the co-creation with users and warmly welcome all the franchised dealerships to join BYD for its promotion.”