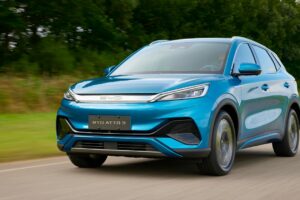 BYD’s Tang, Han and Atto 3 electric cars could soon be available in the UK as the Chinese EV company officially sets out its plans for European sales…

Chinese electric-vehicle giant BYD has confirmed plans for a major expansion into Europe – and it could well include sales in the United Kingdom.

Founded as a battery manufacturer in 1995, BYD quickly took its experience in that area and used it to move into vehicle development and production. The company already has a wide portfolio of EVs on sale in its native China, and its electric commercial vehicles – particularly buses – have made inroads into western markets, including the UK. BYD’s European division was actually established as long ago as 1998.

BYD has now set its sights on European car sales, though, and the company has confirmed that it will launch three models in the region, set to be shown at this autumn’s Paris Motor Show and with first deliveries before the end of this year. The initial effort will be focused on Benelux and Nordic countries, but since right-hand-drive BYDs are already being offered in Australia, it’s conceivable that the UK could be included in the second wave of the firm’s sales push.

The initial model range includes an imposing seven-seat SUV, called Tang, and a swoopy-looking saloon called Han. Both of these are existing models that have been sold outside of Europe as combustion-engined cars and plug-in hybrids, as well as pure-electric vehicles. In EV form they both feature dual-motor set-ups for a prodigious power output of 510bhp and 0-62mph times of less than five seconds (Tang) and four seconds (Han). The Tang led BYD’s initial push into Norway from August 2021, and has featured strongly on the country’s electric-SUV sales charts from this summer.

The smallest vehicle of the trio, the Atto 3, is all but certain to be the cheapest car in the new line-up, and the biggest seller. It’s been designed for Europe, BYD says, and looks the most relevant model for UK customers, as a direct rival for the likes of the VW ID.3 and the newly launched MG4. Indeed, it shares a half-hatchback, half-crossover profile with those vehicles.

The Atto 3 measures 4,455mm long, around 200mm more than the VW, although slightly longer overhangs mean that its wheelbase is actually 50mm shorter than the ID.3’s, at 2,720mm. It offers seating for five, and a 440-litre boot that expands to 1,338 litres when the rear seats are folded down.

The Atto 3 sits on BYD’s new bespoke EV architecture, called e-Platform 3.0, and has powertrain specs that are broadly in line with what’s expected in the class. There’s a single front-mounted motor producing 201bhp and 310Nm of torque – enough, BYD claims, for a 0-62mph time of 7.3 seconds.

Two battery capacities are available globally – 48kWh and 60kWh – and BYD claims a WLTP range of up to 261 miles. The new technical base is open source and available to other brands, and BYD claims it supports 800V electrics. It hasn’t specified if this tech is being used in the Atto 3, though – and the claimed 29 minutes for a 30-to-80-per cent recharge would indicate a more modest speed than that supported by 800V systems. It’s comparable to the rates of likely competitors, however.

Which BYD models could be sold in the UK?

BYD has yet to give details on how it would pitch any of these models in the UK; indeed, it may choose to not offer the Han here at all, given the lower sales potential of saloons with British buyers. The bigger-battery version of the Atto 3 costs AUS$48,000 in Australia – just over £28,000 – but there’s no word on whether this precise specification of vehicle would be the one offered to UK customers.

Equally, BYD has yet to specify any plans for a sales network, or whether it is going to use traditional sales methods at all; some emerging Chinese brands, such as Geely-owned Lynk & Co, have elected to pursue more direct sales paths than conventional dealerships.

However, BYD’s managing director for Europe, Michael Shu, suggested that the company is preparing to work with retail partners. “We are delighted to provide world-leading technologies within our inspirational range of new energy passenger vehicles to European consumers,” Shu said.

“With a customer-centric approach, we are fully committed to this market, and warmly embrace partnerships with key expert dealers across Europe. Through localised partners and stakeholders, we aim to provide the highest level of attentive customer service along with knowledgeable product and after sales service support.”

Would you like to see BYD electric cars on sale in this country? Have your say in the comments…