Buick Electra Concept Uses Ultium EV Tech, but Will This Be the Brand’s Lyriq? 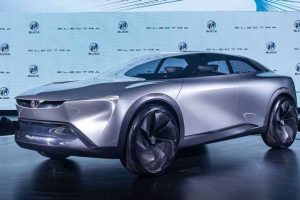 If there is one name from Buick’s past particularly suited to an EV, it’s the Electra. And sure enough, that’s the name Buick used for an electric crossover concept just unveiled at the Beijing auto show, demonstrating the brand’s “potential energy” design language on General Motors’ Ultium electric drivetrain.

The Buick Electra concept is being called a crossover but it could just as easily be described as a tall sedan, featuring a relatively long hood and an airy greenhouse draped in glass on all sides. If there is one unmistakable Buick element to the concept it’s the shape of what would be called the grille on gas-engined cars, and perhaps it’s this sole design element signifying this is a Buick and not some other brand (though Mazda would have been our first guess).

The Electra features plenty of futuristic elements throughout, including butterfly doors relying on facial recognition technology. Lacking a traditional instrument panel, the concept features a large curved display and a retractable steering wheel — a theme that has become popular enough in concept cars — as the future promises to be self-driving. Another popular theme reflected in this concept are floating seats, supported in the Electra’s case by light-weighted armature structure, intended to create the impression of zero gravity inside the cabin, akin to a space capsule. Even the copper gold trim in the cabin itself is meant to evoke spacecraft interiors, which often feature exotic metals.

“Today, Buick’s innovative thinking and imagination of future intelligent mobility have reached the next level with the Electra,” said Sam Basile, executive vice president of SAIC-GM. “I am confident that the aesthetics and technology innovations reflected on the Electra will ultimately help reset consumers’ expectations, just as all previous Buick concepts have done.” 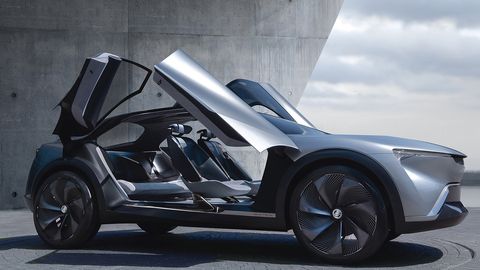 Is this what we can expect from the Ultium drivetrain once the first examples find their way into Hummer and Cadillac vehicles? Perhaps the Electra concept itself is a Cadillac Lyriq in disguise, as the dimensions certainly appear similar even if the design details, bodystyle and everything inside is far more futuristic. But we could see this is as a more conventional wagon-shaped crossover if it were something Buick wanted to put into production, not too dissimilar from the Lyriq.

It’s going to be interesting to see where GM takes the Buick brand when it comes to electrification, and it’s not an oversight that the Buick Electra concept was revealed in China. The Buick brand has seen great success there over the past two decades, dwarfing its achievements in the U.S. during that time. It’s not a stretch to say the Buick brand is now a Chinese-market brand first and foremost, and that it just happens to also offer cars in the U.S. — a reality that could not have been imagined in the 1990s. But take a look at Buick’s lineup in China, as well as the rate of electric cars’ adoption in the country, and it immediately begins to make sense why the Electra concept is being revealed there this week, instead of someplace in the U.S. 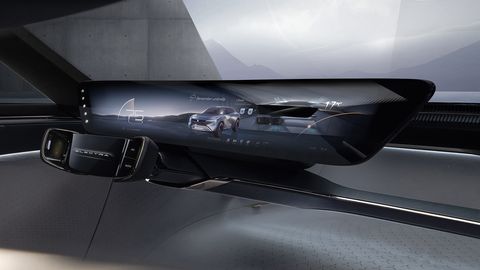 Buick-branded electric cars might still seem like something far down the road in the U.S., but the marque has already been selling a version of the Chevy Volt badged as the Buick Velite in China.

“Building on Buick’s proven leadership in electrification, the Electra represents the brand’s ambition to bring together beautiful styling and intelligent connectivity in the new era of zero emissions,” said Molly Peck, executive director of Buick Sales and Marketing at SAIC-GM.

“The advanced Ultium battery unlocks the exciting new possibilities for what future EVs will look like. The Electra fully leverages state-of-the-art technology to set a new standard for future EV design and personal mobility.”

GM has stayed mum on Electra production prospects but we feel confident the Ultium drivetrain isn’t likely to stay confined to Cadillac when it comes to electric vehicles. For one thing, China’s EV market dwarfs that of the U.S., so perhaps it’s logical to expect a Buick model using as much Lyriq architecture as possible.

Would you like to see a production version of this concept from Buick in the U.S., or do you feel Cadillac is better-suited for offering a large electric performance crossover stateside at this time?