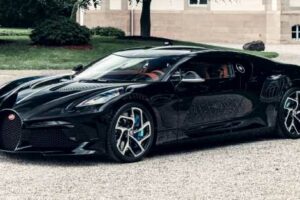 At long last, the Bugatti La Voiture Noire has finally made its world debut. The one-off hypercar is the result of a two year-long development programme, created specifically for one of Bugatti’s staunchest enthusiasts. The price this person paid? Eleven million euros (RM55 million), before taxes.

The name La Voiture Noire isn’t technically new to the Bugatti family. Ettore Bugatti’s son, Jean Bugatti used to own one of four Type 57 SC Atlantic, the fastest car of its time (1930s). Jean had an all-black version, which he named La Voiture Noire. The car mysteriously vanished, seemingly without a trace shortly before the Second World War, and is now considered one of the greatest mysteries of the automotive world.

Bugatti design director Achim Anscheidt first thought of the idea to produce a modern reinterpretation of the lost car 20 years ago, but only now managed to make it a reality. Like the Jean’s Type 57 SC Atlantic, this blacked out La Voiture Noire is billed as a minimalist coupe, evidenced from the reduced lines and the absence of a large and dominant rear wing. It’s based largely on the Chiron, but the body has been extensively reworked, aero-tested and homologated for real world use. Every new part created for the La Voiture Noire had to pass the same strict tests and quality procedures, including hundreds of hours of simulations in the wind tunnel, test benches and track.

Company coachbuilding head, Pierre Rommelfanger said: “Although the La Voiture Noire is a one-off, we spent two years using a test vehicle to develop and test it in all areas like handling and driving safety so that it can be approved.”

Now, look closer at the full LED headlights – you’ll find more than 25 individually milled lighting elements in each headlamp, and every cell of the iconic horseshoe front grille is 3D-printed. At the back, the LED tail light is created from a single piece with no joints, a first for Bugatti. While the Chiron and Divo have four exhaust pipes, this one-off gets six!

Inside, the cabin is trimmed with exquisite Havana Brown leather, again paying tribute to Jean’s Type 57. It’s used on the centre console, centre spine and the doors, which contrasts nicely against the black paint of the exterior and polished aluminium inlays. The drive mode switch is made from rosewood, too.

The automaker has yet to reveal the full technical details, but it’s likely that the are no changes made to the Chiron Sport’s 8.0 litre W16 engine. The quad-turbo petrol mill makes 1,500 PS and 1,600 Nm of torque, with power going out to all four wheels via a seven-speed dual-clutch transmission. The Chiron Sport does the century sprint in under 2.5 seconds, so expect a similar pace from the La Voiture Noire.

Bugatti president Stephan Winkelmann said: “With the completed La Voiture Noire, we are demonstrating once again that we develop the world’s most sophisticated hyper sports cars. With its use of visible carbon-fibre in jet black, the coupe’s breathtaking sculpture looks especially elegant. It’s a veritable grand tourer that went from being a vision to a reality – a unique project which stands for Bugatti’s full creativity and artistry.”