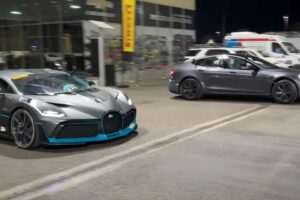 With a selling price tag of around $6 million and extremely limited numbers, spotting a Bugatti Divo on public thoroughfares and typical alleys is like seeing a yeti or a unicorn.

That’s especially more so on a drag strip where things could go wrong. But this example from Dubai begged to differ, courtesy of Brooks of DragTimes. The YouTuber’s latest upload features a drag strip experience at Yas Marina, with several supercars and exotics seen attending the event. One of the special guests was the Bugatti Divo – one out of the only 40 examples to be ever built by the French automaker.

Beyond the extremely limited numbers and exorbitant price tag, the greatness of the Bugatti Divo lies in its performance numbers. It can pull more lateral Gs and produces more downforce than the Chiron, the car that it’s based on. According to Bugatti, the Divo is eight seconds quicker than the Chiron around the Nardò test track.

At the drag strip, the Divo could easily outperform any contention. The Porsche 911 Turbo S paled in comparison to the French hypercar in the video above, which should be a big deal considering how insanely quick the new 911 Turbo S is.

But can the Divo match the performance of the Tesla Model S Plaid? As we all know, the updated super EV has been outperforming hypercars in straight-line contests. Is it the same for the Divo? The rolling start drag race above should settle the score.