Bugatti Committed To Exclusive Cars In The New Rimac Era 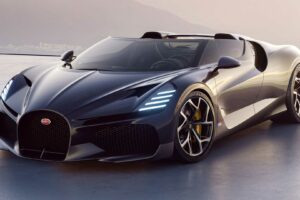 Reports about a second model from Bugatti have been swirling around the Internet for years and high-ranked officials have admitted the possibility of launching a product not related to the Chiron. However, the peeps from Molsheim are concerned a higher volume vehicle would dilute the brand’s image, hence why there won’t be an SUV in the next 10 years. That being said, the W16 hypercar’s successor could still be joined by another vehicle.

In an interview with Autocar, design director Achim Anscheidt explained a more volume-oriented product would have to remain true to Ettore’s ethos of making special cars. Of course, there’s always the risk customers who can afford a Chiron or any of its pricier derivatives will criticize Bugatti for selling out by chasing volume and profit. Anscheidt assures exclusivity will prevail in the new Bugatti Rimac era.

Bugatti Mistral At The Quail

“We always had an idea of what a second model line could be. But then we were also [thinking] at one point, are you starting to sell out the brand? What do you do with this precious logo? Will a step like this be too brutal, by selling that logo for some numbers?”

Anscheidt isn’t against the idea of a more usable Bugatti but emphasizes there should be a balance by making the traditional hypercar even rarer:

“If one does [bring out an every day/second model], I’m always a big fan of balancing this, not to forget the roots of the company or to [create] something more exclusive. This means that if you go into slightly more volumes, you should go more exclusive on the other side, so this remains the core product and it balances this.”

Meanwhile, Bugatti has a lot on its place since it has long sold all 99 Mistral roadsters and the 40 Bolide track-only cars. The “regular” Chiron is also sold out, so the next couple of years will be about finalizing production of the quad-turbo, 8.0-liter machines. The hypercar’s replacement will lose the W16 in favor of a smaller engine as part of a hybrid powertrain.

It remains to be seen whether it has anything to do with Lamborghini’s newly announced twin-turbo V8 hybrid or the naturally aspirated V12 being worked on for the Aventador’s replacement.