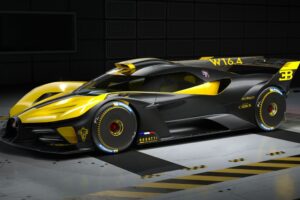 The Bugatti Bolide has been confirmed for production. The maker of the Chiron said so at The Quail, A Motorsports Gathering in California, adding that the track-oriented hypercar will have a 40-unit run. It will cost four million euros (RM20 million) and deliveries will be in 2024.

The Bolide – “racing car” in French – was revealed in November 2020 as a proof of concept (renderings first, actual thing followed a month later), but customers wanted it, so here we are.

“The Bolide generated a great deal of enthusiasm and intrigue last year. Following its presentation, a significant number of enthusiasts and collectors asked us to develop the experimental Bolide as a production vehicle. I was absolutely amazed by the reactions and feedback from customers from all over the world,” said Bugatti president Stephan Winkelmann.

What if Bugatti built a radically light vehicle around the legendary 8.0L W16 engine? That was the question answered by the Bolide, which is billed as “the ultimate driving machine for the track” and therefore a a must-have for Bugatti collectors. The recipe is basically the production W16 engine and minimal bodywork designed with maximum downforce in mind. “For me, being able to turn the radical thought experiment of the Bolide into reality as a production vehicle is a dream come true as it is by far the most challenging project of my 17-year Bugatti career,” said Bugatti design boss Achim Anscheidt.

The many air ducts and the delicate front end are more F1 than the typical hypercar. The Bolide sits very low, with an air intake scoop on the roof and an “ultra-sporty seat position”. The prominent rear diffuser and rear wing do their part to provide high downforce. Bugatti says that the Bolide pays homage to the brand’s successful motorsport past in the 1920s.

In typical Bugatti fashion, the design team opted for a colour split, although the proportion of visible carbon parts is greater here than in other models.

The body may be unique, but underneath it is the familiar and legendary 16-cylinder engine. In the case of the Bolide experimental vehicle, its 1,850 PS of power was achieved, among other things, thanks to 110-octane racing fuel. For the production model, Bugatti opted for RON 98 petrol because it is available worldwide. As such, the vital stats read 1,600 PS and 1,600 Nm of torque (as per the Chiron Super Sport) starting at 2,250 rpm.

Engineers tuned the engine for higher revs per minute for track use, alongside the intake and exhaust system to achieve “even faster, more spontaneous, and extreme responsiveness”. The cooling system for the four turbochargers, engine, transmission, and differential have also been modified for optimum power development.

Bugatti is currently honing the aerodynamics and handling, and are developing the Bolide in line with FIA safety standards. To guarantee maximum safety and sufficient comfort, the Bolide will include HANS system compatibility, an automatic fire extinguishing system, pressure refuelling with a fuel bladder, central wheel locking and a six-point safety belt system.

Molsheim says that the production Bolide will weigh just 1,450 kg (the previous quote was 1,240 kg), for a weight-to-power ratio of 0.9 kg per PS. Not repeated in this latest announcement, but Bugatti previously claimed 1,800 kg of downforce on the rear wing and 800 kg at the front at 320 km/h. Based on simulation, the Bolide’s top speed will be well over 500 km/h, but they’ve not tested this yet.

With such insane speed on tap, there will be exclusive track days for customers “in order to guarantee a safe environment at all times and gradually introduce the customers to the Bolide’s breathtaking performance,” Winkelmann said. Crazy stuff.